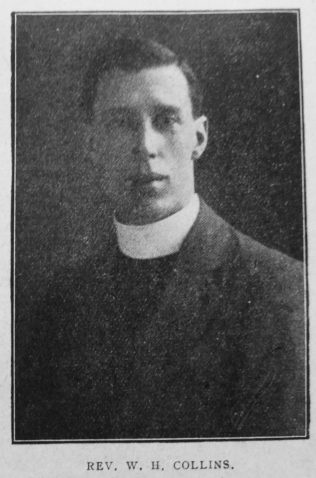 The Students and Missions!

Few things in our recent church life have given more pleasure to our people than the deepening interest in Foreign Missions amongst the students of Hartley College. The Annual Missionary effort of the students is one of the most important events, and we know that their activities in this direction are warmly appraised everywhere. It is altogether to the gain of our Church, that our young ministers should be in the liveliest sympathy with missionary ideals and programmes. Already on the foreign field there are several gifted and devoted young ministers, who one and all confess that the missionary impulse was intensified in the fellowship and service of Hartley College.

One of these is the young missionary whose portrait we have pleasure in giving on this page. We were glad to welcome Mr. Collins on his return from his first term at Fernando Po. We had a most profitable and uplifting conversation with him, and we feel sure that our Missionary Society has a loyal and capable advocate in him. Born at Portland in Dorset, his home is now at Plymouth. He has been reared in our Church. After passing through Hartley College he entered the ministry in 1913.

We judge that his experience on the Island is quite unique, because he has been fortunate to serve during the past two years on all the stations on the Island. He has been supplying first for one and then another of our ministers there. He has laboured at Santa Isabel, San Carlos, Bottler Point, and Baticopo. In addition to the directly spiritual work of our missionary stations there, he has gained insight into the industrial work, and speaks in appreciative words of the value of this important aspect of our service on the Island. We were pleased to hear his testimony of the value of our operations amongst the Fernandians. Happily his health has been well maintained, and he is looking forward to the renewal of his service on the African field. We were especially struck with the way in which he speaks of his colleagues, the Revs. Markham Cook, Bernard Batty, Christopher Finlay, and George Bell. Mr. Collins is now engaged on Deputation service, and we feel sure that he will be warmly welcomed in the homes and churches of our people. We pray that his future may be filled with the best of all success.

Transcription of Obituary in Conference Minutes

WILLIAM HENRY COLLINS: born at Portland, Dorset on 6th February 1888. The son of a navy man he grew up in the Devonport area. As a young man he returned to Portland where he trained as a stonemason. In 1910 he entered Hartley Primitive Methodist Training College, his heart set upon becoming a missionary. In June 1913 he went to the Teignmouth and Dawlish Circuit, and the following January entered the Livingstone College at Leytonstone in London for a medical course. In May 1914 he set sail from Liverpool for Fernando Po, then part of Spanish Guinea. His diary records how lonely he felt during his first Christmas Day upon the Island, the only other Englishman, a trader, being completely drunk. However he must have grown to love the Island for he spent the next twenty years upon it, constructing churches, using his stonemason’s craft, treating minor ailments, teaching and preaching the Gospel. In 1917 on furlough he married Nancy West in Manchester though because of wartime conditions she had to remain in England when he returned to Fernando Po. In 1934 he came back to this country and served in the following circuits: Stour Valley Mission, Bilston (High Street), Droxford, and Shaftesbury and Gillingham. He retired in 1953 and spent many happy years at Sturminster Newton in his beloved Dorset as a very active supemumerary. His wife died in 1966 and finally in 1971 he returned to Bilston to live with his son and daughter-in-law. Always well read, to the end he maintained an alert and sympathetic mind, keeping abreast with, though not always agreeing with, the trends of modern times. A pastor in the real sense, always caring for people, his greatest desire was to share with them the love of Christ. He was one who will be remembered with gratitude by many. He died on 27th May 1974 while on holiday in East Cornwall revisiting some of the places of his youth, in the eighty-seventh year of his age and the sixty-first of his ministry.

William was born on 6 February 1888 at Portland, Dorset, to parents Henry and Jane Elizabeth.

William married Annie West (see note below) in the spring of 1917 at Manchester, Lancashire.

William died on 27 May 1974 in the Liskeard Registration District, Cornwall.

Note: Ship passenger records suggest that William’s wife was called Annie, not Nancy, and aged circa eight years older than William. An Annie Collins, born abt 1879, died in the Sturminster Registration District in 1966.