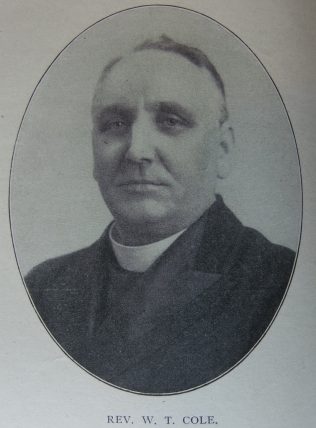 William was born in 1876 at Reddall Hill, nr Dudley, Staffordshire, to parents William and Ann. William, senior, was a gas fitter.

William was taken to Sunday School and Church in infancy. He became a Church member at the age of thirteen. His gift for preaching was discerned in his early teens when he was placed ‘On Note’ by the Blackheath circuit. When aged twenty, William was employed as a hired local preacher at Fir Vale, a newly established cause in the Stanley Street circuit, Sheffield. He entered Hartley College in 1897.

William served as Orphanage Secretary in the Hull District and Sunday School District in the Sheffield District.

William’s obituary records that he was ever a student, his desire to know and preach the truth in Christ urged him to be seeking for the best and most effective way of winning others to the Saviour. He had a radiant and confident faith in Christ manifest in his life and in his preaching. To preach Christ as God’s saving Word to needy souls, in such a manner that they saw their need, was his joy. In all the circuits where he laboured he left the inspiration and influence of a life fully consecrated to the task of preaching and of work lovingly done.

In 1944, William was compelled to superannuate, and continued to reside at Lincoln. In 1950 he moved to live at Bowdon Vale, nr Altrincham.

William married Eva Moor (b abt1879) in the summer of 1904 at Grassington, Yorkshire. Census returns and birth records identify six children.

William died on 17 August 1951 at the General Hospital, Altrincham, Cheshire.

Cole-WT (50 KB Adobe Acrobat document, opens in a new window)
Transcription of obituary published in the Minutes of Conference.