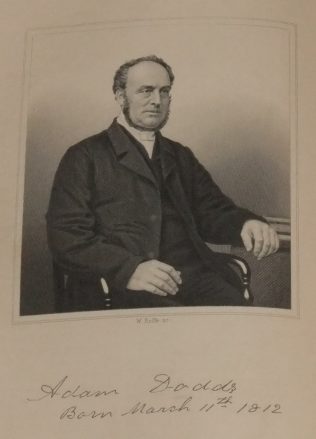 Adam was born on 11 March 1812 at Milfield Hill, Northumberland. His father was a farmsteward and the family attended the Presbyterian church. In 1824 the Bible Christians missioned Milfield and Adam’s older brother, William, was converted. In 1829 the Bible Christians withdrew and the Primitive Methodists took over the society. Adam was converted at the age of 18. He continued to work in agriculture. Aged 21, he became an exhorter and he served for six years as an acceptable and useful local preacher.

At Lazonby, a Primitive chapel was built by the circuit minister, Adam Dodds, who had great problems in acquiring land and was forced into subterfuge because of prejudice. The minister did great work in Cumberland, and consequently, locals believed that the initials ‘A.D.’ found on so many chapels refer to him.

Kendall describes Adam as ‘ Nathaniel-like in his guilelessness’.

Adam’s obituary records that he was recognised as an eminently good and useful minister, and his success rose very largely from the excellence of his character and his pastoral labour.