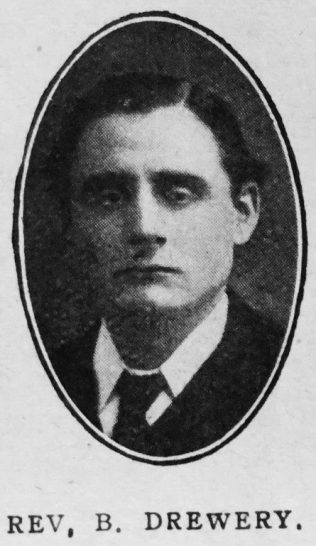 BENJAMIN DREWERY: born at North Kelsey, Lincolnshire, in 1885. A farm lad, he fitted himself by almost superhuman efforts for the ministry. At Hartley College, where his character and physique made him a giant among his fellows, he worked hard, and in 1913 he went to his first circuit. His ministry was spent at Erdington, Richmond, Louth (where after thirty years his rescue work in the Louth flood is still remembered), Gainsborough, Castleford, Mirfield, Rochdale, Yarmouth, Leek, Halifax, and Consett. He was a born orator, with the eloquence and authority of a master and an impish humour that was all his own. He read insatiably to the last hour of his life – theology, psychology, history, and devotion. He had the keen, satirical insight of the mystic. The restoration of many a broken home testifies to his work as a pastor, and a visit from him made a red-letter day for his people. Gifted as he was, his life was one long struggle against adversity. A severe nervous breakdown at Castleford was only overcome in his last circuit. He had lived in the valley of the shadow, and his preaching was that of a man to whom the secrets of life and death were open. His ministry culminated in a hymn-singing broadcast from Consett on Whit Sunday, 1950. The power and glory of that act of worship was the final witness of one whose whole life was a triumphant testimony to the grace of God. On the 12th August 1950 he passed peacefully to his reward, and the distant heaven will be a home to countless souls who learned through him something of the heights and depths of love divine.

Benjamin was born in 1885 at North Kelsey, Lincolnshire, to parents Benjamin and Mary. Benjamin, senior, was a farmer.

Benjamin died on 12 August 1950 at The Dryburn Hospital, Durham.