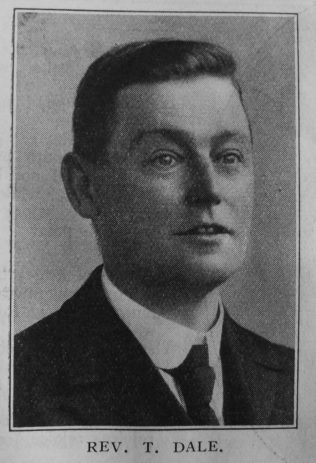 THOMAS DALE: born at Darlington in 1882; entered the Primitive Methodist Ministry in 1905 after training at Hartley College. The greater part of his splendid service was rendered in Northern circuits. He was a keen student, especially familiar with his Greek Testament, and congregations were blessed under his expository preaching. Languages attracted him, and he was a member of the British Esperanto Association with contacts that were world-wide.

All the Districts in which he travelled appreciated his organizing ability, and he served efficiently in various capacities. In Scotland he had been Chairman and Secretary of the Synod. He had a genius for friendship, but it was to circuit life he gave his strength and gave it sacrificially. He was wise and patient in administration. Many were led to discipleship under his influence. A large number remember the comfort and guidance afforded them in times of sorrow, for he ministered out of his own hard experience of trouble and trial. The secret source of his own consolation and reinforcement he imparted to others.

Through failing health he retired in 1946. Release to enter the Higher Service came on 18th April 1947, in his sixty-fourth year and in the forty-second year of his ministry. Modest, courageous, conscientious, a true servant of Christ, faithful to the end, his memorial is found in many lives blessed and made strong in the faith.

Thomas was born on 9 July 1882 at Darlington, Co. Durham, to parents Richard Dale, a printer compositor, and Jane Ann Hewitson.

Before entering the ministry Thomas worked as plumber (1901).

Thomas died on 18 April 1947 in the Barton Registration District, Lancashire.