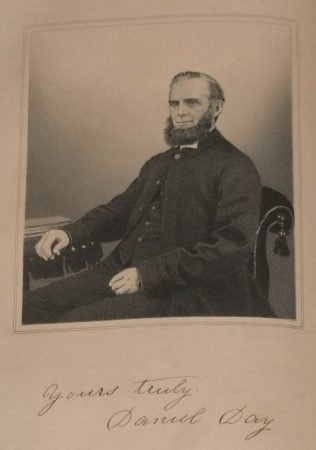 Daniel was born in 1820 at Eastbury. He was converted as a young man at the Primitive Methodist  chapel in his village.

Daniel’s obituary records that he was an acceptable preacher; his strong clear voice causing those ‘hard of hearing’ to anticipate his Sundays with satisfaction.

Never brilliant – after that artificial order which brings some so conspicuously to the front, yet – what was far better, his godly life, his sincere devotion to Christ and His church, his staunch fidelity to every conviction of truth and righteousness, his unsullied reputation, his steady conscious pursuit and fortitude amid afflictions grievous to be borne, gives him a place among those ‘who are the salt of the earth, and the lights of the world.’

Daniel married Mary Mardon (1822-1854) in the spring of 1852 at Weymouth, Dorset. Census returns identify one child. (Note: Mary’s obituary records that she died three weeks after giving birth to her second child.)

Daniel married Selina Gill (1830-1865) in the summer of 1855 at Sherborne, Dorset. Census returns identify one child.

Daniel married Elizabeth (b abt 1848) Census returns identify one child.