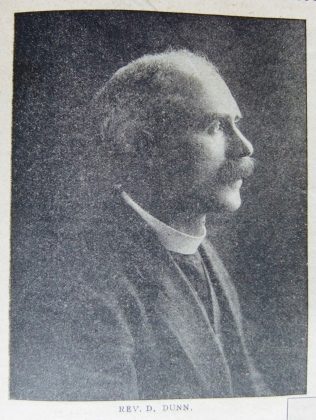 DANIEL DUNN: born at Tipton, Staffs, in the year 1873. He entered the Primitive Methodist Ministry in 1903, after some years as a lay preacher. Wherever he travelled he left an indelible impression as a man of God. He was a man deeply versed in spiritual lore, and rich in communion with his Father. Prayer and Bible study were his chief means of generating power for his office. He read and retained the teaching of modern theologians, and passed on the garnered harvest to those within and without the Church. His winsome appeal and lovable personality brought many into the Kingdom. To know him was a benediction. His childlike faith, loving heart, and quenchless zeal were joys to behold. The devotion of his dear ones through a long weary illness evoked our gratitude. Peacefully and painlessly he passed into the light of heaven on February 25, 1942, at the age of sixty-eight years.

Daniel was born in 1873 at Tipton, Staffordshire, to parents Benjamin and Esther. Benjamin was a publican (1881).