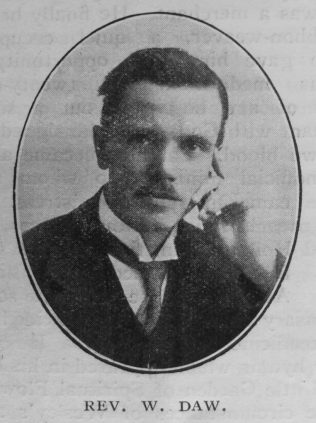 WILLIAM DAW: born at Northampton in 1878. In his early youth he worked at a machine in a boot factory, sustaining his soul with the echoes of Milton’s Paradise Lost conned in the refreshment intervals—an indication of the passion for the good, the beautiful, and the true which was to fertilize his life. After a short period as a lay pastor, he became a candidate for the Primitive Methodist ministry,  trained at Hartley College, and began his probation at Gloucester in 1906, serving thereafter at Abergavenny, Nelson (Glam), Altrincham, Hexham, Wallsend-on-Tyne, Leeds (Bramley), Saltburn, Long Eaton, Sunderland, and Gateshead East.

He became a supernumerary in 1946, spending his last widowed years happily in the generous care of Mr. John and Miss Mabel Strachan at Low Fell. He was a faithful and entirely devoted minister of Christ, winning the hearts of his people by the choice quality of his spirit, and enriching them with the spiritual nourishment which he drew from deep wells. His wide aptitudes were revealed by the variety of his service, which ranged from an effective term in a District secretaryship to the successful conduct for some years of a children’s column in a Connexional magazine.

He had an extensive knowledge of the best literature and a love of art, but music was his chief delight, and he was a proficient pianist. He had the nature of a mystic; he never tired of the spiritual quest, and from it he won an inner serenity and a sense of the unseen world. Those who visited him during the last years of increasing physical weakness carried away something of this spiritual strength. In his many brother ministers and friends he inspired a deep affection, and his influence will abide graciously in the hearts of many.

He died on 31st October 1954, in the seventy-seventh year of his age and the forty-eighth of his ministry.

William was born in 1878 at Islington, London, to parents William, a boot clicker, and Catherine. The family moved to Northampton when William was very young.