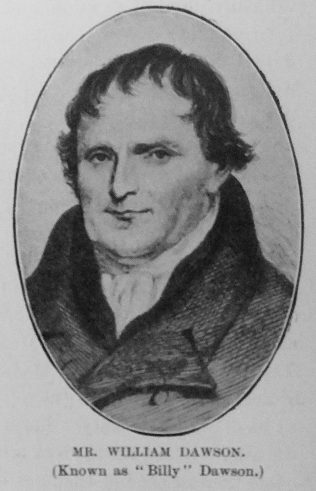 Transcription of Journal Extracts for 1821 published in the Primitive Methodist Magazine.

“Sunday January 21. I spoke at Bilsby at ten, and joined two to the society. At two and six I spoke at Alford. While speaking in the evening, a young man was pricked to the heart, and went home with the cry of, God be merciful to me a sinner. He fell ill, and a doctor was sent for. But he cried out, “I want no physician for the body, I want a physician for the soul.” The doctor was amazed, and wanted to know what was the matter They told him he had been to hear Mr. Dawson preach, and was pricked to the heart on account of his sins. He, thinking it was Mr. Dawson the church parson, said, “What! does he preach such doctrine as that?” They then said, “He has been to hear he Ranters.” “The Ranters!” he said, “They should be made to prove their words.”’ A woman present replied, “Their words have been proved already, for he seems as if he could not rest without a Saviour.” In this state the young man continued all night; but in the morning he found some consolation; and, in a short time after, he obtained the pearl of great price, and became a member of the society.

Monday 22. I spoke at Bilsby. Truly the Lord is with these people. After preaching I met the society. The power of the Lord rested on the people, and think there was not a dry eye in the place except my own; and my heart at times seemed as hard as a stone. Two mourners got their souls blest, and three more went home, sighing for the consolation of Israel. I joined six fresh members.

Sunday September 2. I spoke to a large congregation in the market place at Huntingdon, (the county town of Huntingdonshire.) Both rich and poor came to hear, Some seemed to wonder, some mocked, and some wept. At two, I spoke at Godmanchester, Very many attended. At six, T. Steele, from Tunstall, spoke at Huntingdon, together with a blind young man out of Cheshire. Saturday 9. I spoke at Godmanchester; and after preaching held a prayer-meeting. The Lord was in the midst. I formed a class of seven members. W. Dawson.

I have not been able to identify W Dawson in online records. Can anyone point me in the right direction?

Note: The picture attached from Kendall is that of a William Dawson, who Hugh Bourne met in 1808 in Leeds. I include it here because Leary references it, but have no direct evidence that it is the same person as the travelling preacher whose journal extracts are shown above.