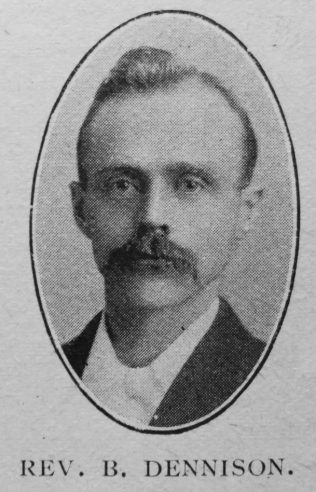 At the moment of writing a mental picture presents itself to the mind. It locates itself in Weardale in the winter of 1887. The heavens were dark, the wind raged, the snow drifted high and covered the field walls, and almost buried the smaller cottages. In a district where winter storms are frequent, this was considered in severity quite exceptional. A weeknight service had been announced to be held in our Frosterley Church, but on account of the storm it was thought that a service would be impossible. A few thought otherwise, however, and accordingly were present. One of the number was a youth who was evidently much impressed, and thinking seriously of his future. He also felt a call had come to him, and during the service walked to the communion rail and gave himself to God. That youth was Burnhope Dennison, the son of Thomas and Mary Dennison. He was born at Harehopegill, near Frosterley, on September 17th, 1870. He was the third son in a family of fourteen. From childhood he lived in a religious atmosphere, all in his home being accustomed to gather daily at the family altar.

When old enough he was sent to Sunday school, and also to the day school at Frosterley, which was under the Stanhope School Board. In after years he often expressed his indebtedness to the school-master, Mr. Squire. In his work he gave considerable promise, but his school-days were cut short, as the exigencies of his home were such that he had to commence work, when quite young, with his father and elder brother in the limestone quarries, Frosterley.

His conversion at the age of seventeen, under the ministry of Emerson Phillipson, has proved to be the outstanding event in his life. He at once identified himself with the Christian Church, and took an active interest in all departments of Church work, but he was especially interested in the Bible Class which was conducted by the minister. This class meant much to him and also to several others who hold honourable places in our Church to-day. With complete abandon he gave himself to mental culture. He was also a lover of nature. We have evidence of this in the art work he has left, representing hills, streams and landscapes; and, perhaps all unconsciously to himself, nature had moulded and developed him in these directions. The Church with great interest was watching the young life, and saw in him one of exceptional gifts.

In 1889 he made his first attempt to preach in Wearhead Chapel, Upper Weardale, his text was in Proverbs, chapter 18, verse 24: “A man that hath friends must show himself friendly.” It was felt by all present that the effort was full of promise. He applied himself to his class books, and passed the examinations, and his name appeared on the Westgate Circuit plan as an approved preacher in the year 1891. In the following year he was recommended for the ministry, and after conscientious study passed the required examinations, and entered Hartley College, Manchester, in the year 1893.

He had much to say about his term at college, of its value to him in the ministry, in the direction of discipline and equipment for subsequent work. His resolve was high and sacred; he would give himself unselfishly to the work of the ministry. He continued a student, and was always welcomed as a preacher. Many live to testify to his splendid work and to the charm of his life. Strong men bowed to him; their love was deep and sincere; they believed in him truly as a man of God.

He travelled his probation in Gateshead II. Circuit, and remained one year after its completion. On entering his second circuit, Stockton-on-Tees, he was married to Miss Grace A. Maddison, of Frosterley, which proved to be a most happy union. They had known each other from childhood, and with bright hopes they jointly entered their work. They were welcomed to the hearts and homes of the people of Stockton, and the work done by them is imperishable. After five years they removed to Burnopfield circuit where they remained four years. They then came to Stanley, where, after five years, their ministry closed.

Mr. Dennison’s gifts and graces were admired by all who knew him. He loved his work; the people found in him a friend and sympathiser, and in particular the sick and poor. He kept in living touch with his work. He had laid the foundation of what promised to be a bright future. In Stockton he joined hands with others in the circuit’s remarkable extensions.

In Burnopfield Circuit he had a busy term in building and altering chapels; and in Stanley Circuit he saw the Tanfield Lea Church and School built. At the time of his death he was the chosen secretary of the Sunderland and Newcastle District. It was seen he had business aptitude and the gift of the management of men. Had he been spared there was the prospect of higher Connexional honours.

To him it was but the noonday of life when sickness came. After much pressure he accepted from his circuit an offer of a month’s rest, and went to Torquay in February, 1913, and returned much improved. The nature of the disease, however, together with the anxiety of his wife’s serious illness, made recovery impossible. His colleague writes: “Then commenced that awful pilgrimage to the grave—unrelieved by a single day’s improvement—whose tragedy let no man recall save to remember how the eyes of each spoke again, and the lips spoke cheer, the heart dare not believe.”’

All that nursing and medical skill could do had been done to save him, but was of no avail. He calmly and with Christian resignation met death, so that in dying he had defeated death.

He passed to the Homeland on August 27th, 1914. The day of burial was 31st August. Large numbers attended the services in the Stanley and Frosterley churches; suitable addresses were delivered by the Revs. W. Barton and E. Phillipson. Others sharing in the services were: the Vicar of Beamish, the Revs. W A. French, T. Sykes, J. Fish, G. Armstrong, C. Humble, J. Forster, J.G. Bowran, J. Rutherford, J.T. Gallon, A. Briggs, and T.H. Berryman.

Under the shadow of the hills where he had been cradled and reared we laid him to rest. ‘“Until the day breaks and the shadows flee away.”

Burnhope was born in 1870 at Harehopegill, nr. Frosterley, Co. Durham, to parents Thomas, a limestone quarryman (1881), and Mary. He was baptised on 18 December 1870 at Stanhope, Co. Durham.

Before entering the ministry Burnhope was a limestone quarryman.