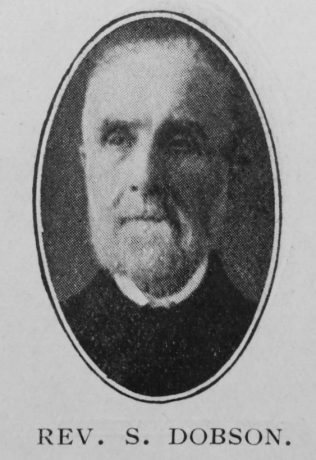 A life of rare devotion and usefulness closed with the passing of Rev. Samuel Dobson on 12th June, 1914. His later years were spent at Luton I., where from 1900 to 1905 he acted as a superannuate assistant and rendered excellent service.

Born March 27th, 1830, at Higher Walton, near Warrington, he had few advantages. When eighteen he obtained a situation at Runcorn, and there resided with a brother who was a local preacher of ours. Largely through the influence of Rev. W. Wilkinson, he was led to the Saviour in the spring of 1850. Soon he became a class leader, then a local preacher. Dr. William Antliff, then Superintendent of Preston Brook Circuit, Impressed with the young man’s character and usefulness, gave him valuable guidance. In 1854 Mr. Dobson entered the ministry, and was appointed to Northwich. In Preston, his next circuit, a nervous disorder compelled him to resign the ministry.

Returning to his former occupation at Runcorn Docks, he had two remarkable escapes from drowning within eighteen months. In 1857 he became a town missionary at Warrington, a position he filled with great usefulness for eight years. Then Dr. Antliff again induced him to return to the ministry, and the Conference of 1865 stationed him to Sheerness, as second preacher.

He was a married man, paid his own house rent, and enjoyed the magnificent salary of fifteen shillings a week. North Bow was his next station, and then Sheerness, where he lost his wife.

In London III. he married again, and was a second time bereaved within eleven months. In 1873 he went to Weymouth, which he superintended for the next four years with great success. He built three new chapels and witnessed a gracious revival, through which sixty members were added to the church at Portland alone. Subsequently he travelled at Chalfont St. Giles, Colne Brook, Marden, Wellingborough, and Bedford, where he was second preacher for two years and then superintendent for three years. At Chertsey he found the walking too much for him, and was compelled to seek superannuation. At Bedford, where he located, he rendered valuable service during the next five years, and then removed to Luton I., where, in addition to his other work, he acted as chaplain at the Workhouse.

Primitive Methodism never had a more faithful or devoted minister than Samuel Dobson. He loved his Church intensely, and did his utmost to promote her interests. His genuine goodness, his loyalty, his peace-loving disposition, his uprightness and unswerving integrity won the respect of all who came in contact with him. He was an earnest, faithful preacher, and a devoted family visitor. During the last four or five years he was unable to take any public work, but with unfailing regularity he would be found at the services, unless quite incapacitated by illness. While suffering a good deal he yet managed to be fairly active, and continued to take a deep interest in the welfare of the Connexion.

Of the fundamentals of the faith he had a firm grasp, and was fervently evangelical. His last illness was a severe attack of bronchial catarrh. He arranged all his affairs and calmly awaited the end. Resting his all on the great atoning sacrifice of Jesus Christ, he was full of hope and peace. On Friday, June 12th, he passed peacefully to the rest and service of heaven. The interment took place on the

Tuesday following. Revs. W.F. Clulow, L.H. Wood, A. Fawcett and R.N. Wycherley took part in the service in Cardigan Street Church, and the service at the grave was conducted by Rev. W.F. Clulow. A memorial service was held in the same place by Rev. R.R. Connell on July 12th. A widow and two sons, both local preachers, are left to cherish the memory of a good man.

He married Louisa Rumsey (abt1845-1873) in the spring of 1872 in the West Ham Registration District, London. Census returns identify two children.