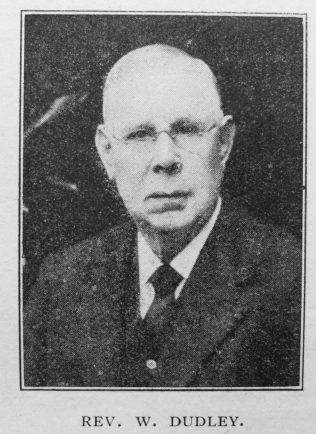 Transcription of obituary published in the Primitive Methodist Magazine by Rev. T.A. Kelley

ON Sunday, October 24th, the Rev. William Dudley preached with passion and power in our spacious Church at Blackheath, Staffs. The following Saturday he passed peacefully into the Great Beyond whilst reading. That he should have preached to the last, and delivered his final message from one of his favourite pulpits, was fitting, for William Dudley was essentially a great preacher.

Born at Wordsley in the year 1854, his native Circuit, Brierley Hill, called him into the ministry in his twentieth year. For fifty years he served in the active work, and continued to preach during his four years of Superannuation. Throughout his ministry he lived for his Circuits, and had the unique experience of travelling twice on four stations. He had no desire for District or Connexional office. He fulfilled what administrative duties he was called upon to execute, but he realized that his supreme task was to preach the Word. Gifted with a fine and commanding presence, and endowed with remarkable powers of intuition, captivating eloquence, and arresting passion, he was essentially a preacher of the evangel, ranking amongst the greatest of our Church.

The Rev. B.A. Barber said at the funeral: “The pulpit was his throne, and he paid the price of its demands in the seclusion of his study. He was a keen student of human nature, and with exceptional ability could analyze and portray human character. He was a great reader of the mystics, poets, and prophets, and was well versed in biography and the devotional classics. Yet more, he sought and found God in his own soul. He believed his own thoughts, and thus became an original and independent thinker, delivering the Word that had first been given to him. He stirred deeply those to whom he appealed. He touched the very springs of being, where thought is born, and where volition springs. He had a clear vision of the heights, and his hearers caught the vision too.”

Another testified: “William Dudley taught me as no one else the power of the pulpit.”

Supplementing “his massive preaching” was the power of his personality and the influence of his character. Possessing a sensitive nature, he might on first acquaintance give the impression of aloofness, but to know him was to value his friendship. With loyalty and sincerity he combined sympathy and sagacity.

He possessed a delightful vein of humour and satire. He made his officials and co-workers his companions, and young men found in him their friend. The testimonies to this are too numerous to quote; that of Dr. S. Parkes Cadman will suffice: “Well, there is this for it, that he died at the top and not at the bottom, decrepit, worn out, and weary of the race. His powers were with him to the last. And what marvellous powers they were! I think of him as I turn back to fifty years ago, and even longer, when as a boy he was my hero, and one whom I never have had to take out of my little hall of fame. When I was unknown, poor, misunderstood, his life crossed mine, like the sun in its meridian height, and the glow he left with me has never died. These are great things to say… .”

“For such a one as William Dudley there is no such thing as death. Those splendid qualities which we admired in him cannot be touched by death. They are only released for finer expression.” So writes a brother minister, and so the ministers and multitude felt who gathered at our Smethwick Church, and the Uplands Cemetery for the funeral. He lives in the lives he has left behind: in the daughter who seeks to alleviate suffering in the hospital: in the son who stands in the forefront of the American ministry: in all those members and workers of our churches whom he inspired by this manhood and his messages. He has passed, but he yet speaks. As one puts it: “Great preacher as he was, his greatest sermon was himself.”

William was born in 1854 at Wordsley, Staffordshire, to parents William, a tailor & draper, and Ann.

Before entering the ministry, William worked as a chemist’s assistant (1871).

He married Lucy Ann Shingler (1860-1935) in the summer of 1885 in the Atcham Registration District, Shropshire. Census returns identify two children.

William did on 30 October 1928 in the Birmingham South Registration District, Warwickshire.