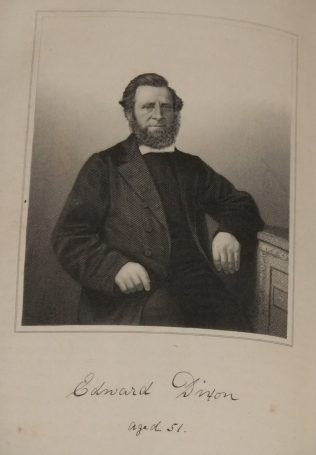 Edward was born in February 1815 at Northallerton, Yorkshire to parents William and Frances. He was baptised on 28 February 1815 at Northallerton. Growing up, he attended the Wesleyan chapel with his grandparents. Edward was converted on 31 August 1834 through the Primitive Methodists and he soon answered a call to preach. He took his first appointment on 16 October 1836.

As an itinerant minister, over 700 persons were converted during his ministry. Loss of his voice in 1872 caused him to be superannuated.

His obituary records that he was a diligent student and a fair Greek and Hebrew scholar. His sermons were brim full of gospel fruit gathered from the tree of life, and adapted to awaken sinners, lead penitents to Christ, and help Christians to obtain higher conditions of spiritual life.