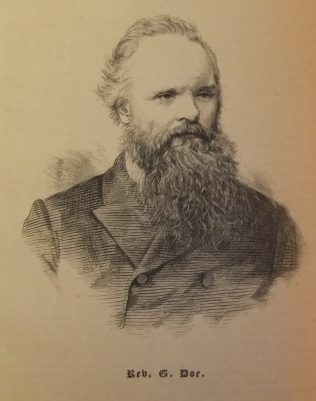 Before entering the ministry, George was apprenticed to Edward Doust, a cordwainer (shoemaker) at Goudhurst.

George was known as a boy preacher, during which time he helped to mission Tunbridge Wells.

The Thames Valley Methodist Circuit has published the following account of George’s time at Maidenhead.

In 1880, Rev George Doe was appointed Superintendent Minister.  Under his leadership the decision was taken to build a new chapel.  A plot of land in Queen Street was leased in 1881, and a new chapel built.  The Chapel was opened officially on 10th September 1882.  In contrast with the damp, musty smell of the Bridge Street Chapel, it was light, spacious and well ventilated.  It had seating for 230 peopleand cost £1,550.The facilities were a significant improvement on the previous chapel, and the building included a schoolroom, a classroom and toilets.

(The Bridge Street Chapel was sold; its new owner leased it initially to a temperance organisation, after which it was taken over by the Salvation Army, who occupied it from 1886 to 1916 prior to moving to another part of Maidenhead.)

Also during Rev George Doe’s time in Maidenhead the Primitives became the first Methodist Church in the district to introduce women preachers into their pulpit with the minister’s wife, Mrs Doe taking a leading part.  The Misses Waddy, daughters of a noted Wesleyan Minister, also preached from the Primitives’ pulpit, but, interestingly, not apparently from the Wesleyans’.

In the 5 years Rev George Doe was in Maidenhead, the membership rose from 34 to 90, the Sunday School more than doubled its numbers to 160, income was now equalling expenditure and the debt on the new Chapel had been reduced to £300.  The Primitives were firmly established!

Kendall writes about the Southwark Mission; ‘For nearly twenty years the Southwark Mission struggled bravely and, in spite of its crushing debt and the surroundings of poverty and squalor, did heroic and self-sacrificing work for the social and spiritual redemption of the neighbourhood. Among the ministers of marked ability who superintended and co-operated in the development of this mission may be mentioned such honoured men as Dr. Samuel Antliff, William Wardle, James Pickett, Joseph Aston, George Bell, and George Doe. These brethren with great devotion sought to develop the work of this mission, and not without some success.’

George’s obituary records that he gave his whole life and energy to the work of building up the church, without stint or reserve. He loved to preach the old evangelical doctrines, and preached with great spiritual power.

http://www.methodistthamesvalley.org.uk/hstm-historytxt.htm , ‘The History of High Street and Methodism in Central Maidenhead’

Also see this page for another picture of George and Charlotte.