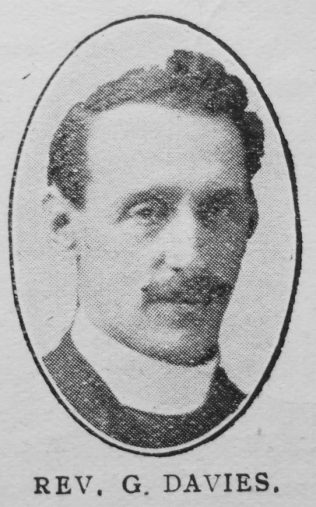 GEORGE DAVIES (B) : born at Dukinfield in 1880, where as a boy he became a member of the Primitive Methodist Church. Called to the work of preaching, he entered the Ministry in 1908 after training at Hartley College. He spent the larger part of his ministry in the north-east of England. His fine humanity made him enter with insight and understanding into the struggles of the poor. His pulpit work was prepared with great thoroughness. His hearers knew that they were listening to one who had come to certainty through facing with honesty the facts of life. When men heard him pray they felt that their minister lived near to God. Dwelling on the uplands of the soul, he guided many to the heights. The closing years of his ministry were marked by ill-health, but were significant for an increasing spiritual radiance. He literally fell asleep on December 16, 1943, to wake in the Homeland in his sixty-fourth year and the thirty-sixth of his ministry.

George was born in 1880 at Dukinfield, Cheshire, to parents John and Ann. John was a coal miner.

The 1901 census records George as a warehouseman.

His probate record identifies that George was married to Emma.

George died on 16 December 1943 at Ashton on Ribble, Preston, Lancashire.