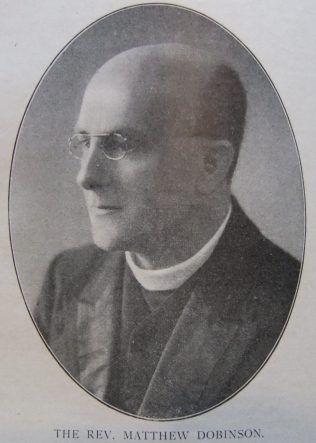 Matthew was born in 1872 at Seaton Delaval, Northumberland, to parents William and Thomasina. William was a colliery joiner (1881) and later a colliery painter (1901).

At Mexborough, during WW1, Matthew served as chaplain to a military hospital.

His obituary records that Matthew lived close to the centre of things, and had a deep understanding of the mystery and wonder of life. He knew that in the heart of God – as well as on Calvary’s Hill – there was a Cross, and he was never far from that Cross. He was conscious of his own need of atoning love, and he knew that others shared that need. It was this that made him such an understanding friend; that enabled him – shy and sensitive man that he was – to live with courage and dignity amidst the common people. It was this that gave him the capacity to lead others into the light of eternal life, that compelled him to devote time to the training of young men as ambassadors for Christ. He had one continuous aim, to serve his Lord and His Church.

Matthew’s sisters, in turn, carried out the duties of the lady of the manse.