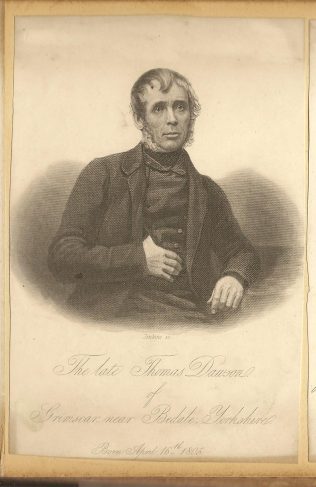 Petty records that it was in a revival in 1820 at Marton, Yorkshire, that Thomas was brought to God when about fifteen years of age under the ministry of William Clowes. Thomas continued to live with his parents for two years after his conversion working as a farmer.

Thomas entered the itinerancy on 6 September 1922 at Kettlesing, with the reluctant consent of his father. He then moved on to Brompton before the Conference of 1823 stationed him at Guisborough. The life of a travelling preacher was hard and he often had to walk above 100 miles in a week. Nutrition was also difficult; often he had to survive on two scanty meals per day.

Thomas was unable to complete his probationary training due to illness. He suffered from asthma.

Contribution to the connexion

After his marriage Thomas lived at Newton-le-Willows for three years and then took a farm at Watlass. From Watlass he moved to Firby, where for four years his house was used as a place of preaching. His father died in 1842. In 1847, Thomas retired from business and resided at Masham for four years. He then took a farm at Grimscar, near Bedale, where he lived until his death.

For many years Thomas was a member of the General Missionary Committee, the District Committee, and the Publishing Committee. He also held the responsible position of auditor for various Connexional Funds. At his last Conference, in 1856, he was elected a permanent member of Conference, but died for the next Conference.

Thomas died in February 1857 at Grimscar, near Bedale, Yorkshire. He was buried in the Dissenters’ burial ground in Northallerton Cemetery, Yorkshire. Before he died he said; “I have been independent of the Establishment through life, and will be in death.”