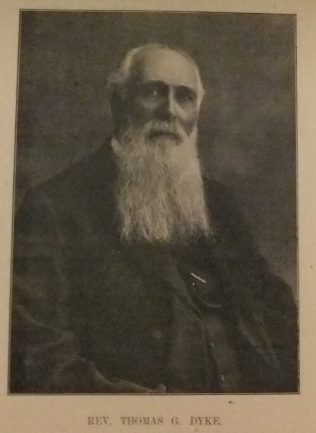 Thomas was born in 1843 at Llambadarn Fawr, Radnorshire to parents John Dyke and Naomi Griffiths. John was a farmer. John and Naomi were nonconformists and attended the Baptist Church.

Thomas had a good education, attending first public schools and later the grammar school at Newton, Montgomeryshire. During his boyhood, he was sent to the Wesleyan Sunday School. When aged twenty-one at the village of Llangunllo, Thomas was drawn to attending services conducted by the Primitive Methodists. He was converted under the powerful and persuasive ministry of Rev George Middleton. Thomas soon became a class leader and exhorter.

Thomas was a great plodder and wise administrator, and did excellent service in dealing effectively with heavy chapel liabilities, and leading circuit officials upon lines which have secured the best results in ‘consolidating’ the stations.

Thomas was a strong advocate of Temperance Reform. For many tears he was Vice-president of the Land Nationalisation Society and when at Aberavon he was president of the Aberavon Phrenological Society.

Note:    Phrenology was the study of the relationships between a person’s character and the morphology of the skull.