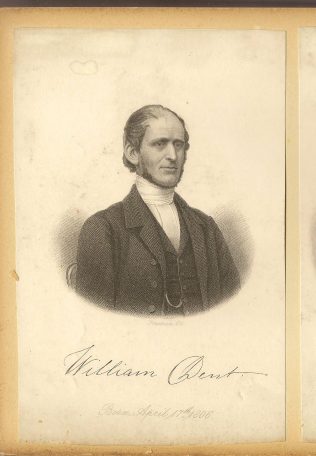 Petty records that the Ripon Circuit reported 336 members in 1834. With William as superintendent, this was increased to 450 in two years.

William, himself, remembered that “though he was quite destitute of thesinging gift, yet he used to walk in the front of the processions holding up his hymn-book as if he could sing with the best of us; thus showing, at least, what side he was on”[

Patterson writes;’ Well does the present writer remember “his spare form, ascetic, spiritual-looking face, and his quick bodily movements,” when something the preacher said touched him. In Nelson Street Chapel, in the early sixties, “the fire was down” upon a full congregation. William Sanderson was the preacher — it was an anniversary occasion; William Dent was on the rostrum. Mr. Sanderson had a good time with the great text, “When I consider Thy heavens,” and Mr. Dent’s body swayed like a rolling craft; ever and anon he thrust his arms above his head, his fingers, as they met, moving quickly as if playing upon a stringed instrument, the music for which he himself only knew.’

J Petty, The History of the Primitive Methodist Connexion, 1880, p386