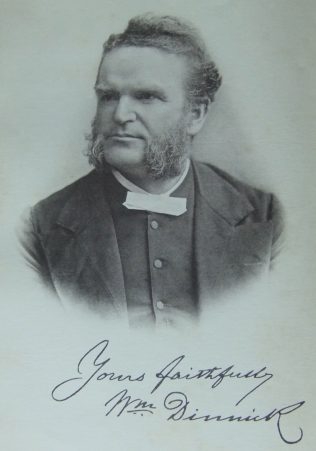 William was born on 26 May 1840 at Devonport, to parents Thomas Dinnick and Mary Dunn. He was one of 14 children; 6th son and 11th child. Thomas worked in H.M. Dockyard. Mary was a third generation Methodist; her parents and grandparents had entertained John Wesley. Five of the brothers entered the ministry.

The Primitive Methodist cause was not fully established at Plymouth until 1854, although William’s parents had entertained the movement’s founders in 1825.

William was on the preachers plan at the age of 15. Aged about 18, he was selected as a trustee of the first Primitive Methodist Chapel in Plymouth. William accepted the third call he received to ministry – he had been attracted to an apprenticeship in an important department at the Naval Dockyard.

William’s obituary records that he had an invincible faith in God at the centre of all he did.

He was a member of the General Committee and General Missionary Committee from 1875.

William spent 8 years at Ramsgate and built 11 places of worship. Throughout his ministry, William built 23 chapels and two manses, largely clearing them of debt.

He was sent to Brighton, a small station, in 1875 and set the foundations of growth into two circuits and 2 mission stations. For information relating to his time in Brighton see the follow this link.

The 1890 biography records that as a preacher, William was both earnest and practical, and if the same attention had been devoted to pulpit preparation, that had been given to other departments of Christian work, no doubt he would have shone brightly in that respect also.

William was elected a Guardian of the Poor on a board covering some 26 parishes in Sussex.

See also – J A Funnell, Rev William Dinnick: A Tribute to One of the Great Primitive Methodist Builders of the Nineteenth Century, 1980