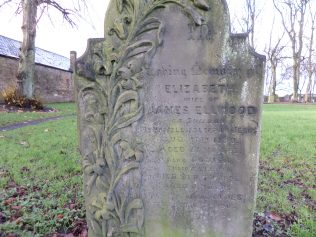 Joseph Ellwood was my uncle by marriage, whom I remember from my boyhood. In researching my family history, I have discovered the following additional facts about him.

The family on his father’s side came originally from Crosby Ravensworth, near Shap, Westmorland. Joseph’s mother was born in Westgate, Weardale.

Joseph Ellwood, or J. K. as he was known, attended elementary school in Crook, Co. Durham, then followed his father and elder brother William by working in the coal mines. The 1881 National Census gives the family’s address as 49 Garbutt Street, Shildon, a road that still exists. It was in Shildon that he and William were converted, after which he trained for the ministry of the Primitive Methodist Church. No details of his training are known. It has been stated that there was a Primitive Methodist ministerial training college in Manchester. If that is the case, there appears to be no evidence that he attended it. His first church, from 1894 to 1895, was at a branch of the Clapton Mission in Southend-on-Sea, where he lived at Hope Villa, Tylers Avenue. That was followed by three years at Walthamstow from 1895 to 1898, during which he lived at 46 Erskine Road. The Primitive Methodist church in Walthamstow High Street also had four mission halls in the town, for which Joseph and a Revd. W. Brass were responsible. Those early years appear to have been probationary periods. From 1898 to 1902 Jospeh was minister at Woodfalls, a village some 12 miles south-southeast of Salisbury, then from 1902 to 1906 back at North Shields, his birthplace. His sister Elizabeth (Lily) acted as his housekeeper from then on for the rest of her life. Joseph, perhaps impetuously, promised her he would never marry during her lifetime if she kept house for him.

In 1906 he moved to the Clapton Park Tabernacle in Blurton Road, Clapton, north-east London, a thriving church founded by the Revd. Thomas Jackson, a well-known minister who had taken over the Theatre Royal in Glenavon Road in 1884, presumably as a place of worship. The Tabernacle had opened in 1885. The manse in Thomas Jackson’s day (1891 census) had been at 41 Powerscroft Road, and it is likely that J.K. Ellwood and his sister  lived in the same house in his early days there. By 1933 he was at 65 Elderfield Road. In 1903 the average attendances at the Tabernacle were 107 in the morning and 170 in the evening (information from Hackney Archives). J. K. Ellwood did much good work helping the poor in the neighbourhood and (according to his obituary) received donations for his charitable activities from all around the country. On his retirement 28 years later in 1934 he was presented with a reading lamp, a Marconi wireless-set and a cheque for £61.12.3, which was a large sum in those days, when wages were often in the region of three or four pounds a week. For some years afterwards he worked as a supernumerary minister, assisting J. E. Thorpe in Whitechapel. In 1934 he moved to a then newly built house in Alma Avenue, Highams Park, near Chingford. It was not long before he began suffering from deafness, which severely affected him in the last years of his life.

During the Second World War Joseph Ellwood became acting minister of the Highams Park Congregational Church in Malvern Avenue, which was without a regular minister for some years. The Clapton Pack Tabernacle, meanwhile, was badly damaged in air raids. After the war the Methodists moved to the newly built Chatsworth Road Methodist Church in 1958 and the Blurton Road building was taken over by the Roman Catholics as St Jude’s Church.   It was only after his sister Lily died that Joseph felt free to marry my aunt, Amelia (Millie) Goodger, with whom he had had a strong bond of affection for many years. Millie was thirty years younger;  in fact, long before, he had christened her as a girl of about ten attending his church in Clapton. Sadly, early on in their three short years of married life from the age of 84 onwards, he began to suffer from senile dementia and died suddenly at his home on October 23 1952, aged nearly 87.

Much of this information was provided by Dr E. D. Graham, General Secretary of the Wesleyan Historical Society, in 1999. Other information came from Richard Radcliffe FSG, the archivist at Methodist Central Hall, Westminster, in 2005, and from Part Two of “Non-Conformity in Walthamstow” published in 1979 by the Walthamstow Antiquarian Society, ISBN 0 85480 037 9.

In 1954 Joseph’s widow Millie presented a communion table to the Clapton Mission in his memory on the occasion of the Mission’s 70th anniversary.

A photograph of Joseph discovered in 2007 at Woodfalls Church, where he had been the minister a century before, described him as “Joey Elllwood”. There is no knowledge of his being called Joey in later life.