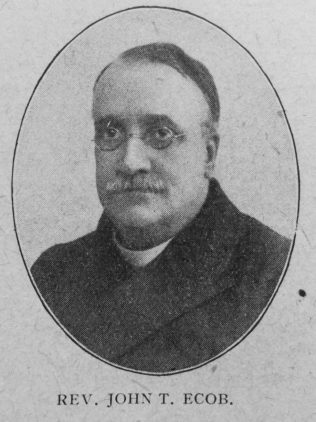 JOHN THOMAS ECOB: born at Derby in 1862 of Methodist parents, he was educated for the teaching profession. After training at Hartley College, he entered the Primitive Methodist Ministry in 1882. His work was characterized by an earnestness and devotion which won wide recognition and left a deep impression in all the circuits he served.

Possessed of the gift of language in an unusual degree, his preaching was of a high order, while his reading showed wide catholicity; natural science and religious mysticism finding special favour. His literary abilities, both as a writer of fiction and essays, found frequent outlet in Connexional periodicals, and his business acumen was recognized by his appointment as Secretary of the Nottingham District.

After forty-seven years in the active ministry he retired in 1929, preserving an eagerness to render greater service for his Master than his failing physical powers would allow. He passed beyond the shadows on September 8, 1940, after a hallowed ministry of fifty-eight years.

John was born in late 1862 at Derby, Derbyshire, to parents John, a baker, and Emma.

He married Mehetabel Chapman (1860-1935) in the summer of 1886 at Horncastle, Lincolnshire. Census returns identify five children.