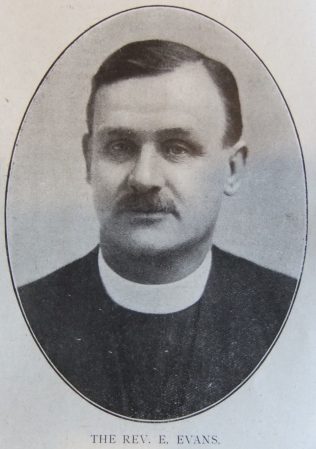 Edward was born in 1871 at Trimdon Grange, Co Durham, to parents John and Elizabeth. John was a coal miner.

Edward became associated with the PM Church at Blackhill when he was twelve and was converted at sixteen. He was admitted to full plan at nineteen. He entered Hartley College in 1896.

Edward worked as a coal miner before entering the ministry.

His obituary records that Edward was a most diligent and methodical servant of the Methodist Church. Sidelines did not at any time divert him from the principal work to which he had early dedicated his life. The care and cure of souls, with the administration of circuit affairs, absorbed all his energies. In disposition he was reserved, quiet, lovable, with the light of gentle humour irradiating his personality. Into the fabric of life he wove the fair threads of humility, integrity, and devotion, sustained by the love of God which succours all lesser loves.

His correspondence revealed an unfailing courtesy even under conditions of severe strain. As a colleague he was friendly, helpful and reliable, but it was as a preacher that he chiefly excelled. To possess and to manifest the spirit of the Gospel, he often said, was the one thing that mattered.

Edward married Mary Williams (1874-1915) in the summer of 1902 in the Lanchester Registration District, Durham. Census returns identify one child.