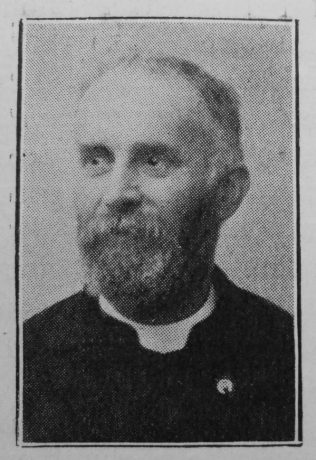 Transcription of Obituary in the Primitive Methodist Magazine by John Humphries

Henry Errington was born at Shotton, Durham, September 1853, and died at Morley, December 27th, 1906. Commencing work when eight he lived a strenuous life to the end. His parents attended our services, and he was converted in a cottage service at Wheatley Hill, Thornley Circuit. The spiritual was followed by intellectual quickening, and he was greatly helped by Mr. John Wilson, M.P., who inspired him with high ideals of life and service. With Mr. Wilson he went “on note,” and after a short period as local preacher was recommended for the ministry. From Sunderland Institute he went to Preston, where he was four years – years of personal and circuit fruitfulness. He afterwards travelled in Glasgow, Richmond (Yorks.), Northallerton, Barnard Castle, Allendale, Seaham Harbour, North Shields, Eastleigh, and Morley.

On all his stations he won the confidence of the officials and the love of the members. He built some new chapels and in more than one instance led the people into a larger place. For some years he battled with an enfeebled constitution, and with heroic effort never spared himself. He interpreted his commission as a minister in so large a spirit that he often did work which he might reasonably have left to others. He was in keen sympathy with all that made for the progress of the people, and served on a School Board. As District Sunday School Secretary he was in his element, and gave himself to the work with much enthusiasm. He was accustomed to give one Sunday each quarter for visiting the schools of the district, and thus his last Sabbath of active service was spent.

Though unwell, he persisted in keeping his engagement at Horbury, November 18th. In spite of the wishes of his friends that he should rest in the afternoon, he visited the school and urged the young people to use all their talents to the full. The evening service was most impressive. Though feeling no worse on his return home he had a bad night, and next day the doctor ordered complete and immediate rest. The Quarterly Meeting gave him three months’ rest. On December 23rd, a specialist was called in, but little could be done. He lingered till the 27th, in the early hours of which his brave spirit took flight.

On the following Saturday, though it was a bitterly cold day and the cortege left the house at nine in the morning, a large number of men and some women walked in procession through the main street of Morley. Amongst them were the Revs. S.S. Henshaw, J.R. Irving, Messrs. A. Lax, R. Winn, J. Gott, Councillor Stockdale, and Rev. J. Humphries, who went to South Shields as a deputation from the circuit. Rev. M.T. Pickering conducted the service in the Glebe Chapel, assisted by Revs. G. Armstrong and A. Lamont. Rev. W. A. French, representing the General Committee, gave a most appropriate address, dwelling specially on the self-sacrificing and unobtrusive spirit in which our brother had done his work. The words at the grave were read by the writer, and Rev. W.A. French closed with prayer. Memorial services were held in all the places in the Morley Circuit.

Many of the qualities which make an ideal Primitive Methodist minister were finely blended in Brother Errington. Very methodical, he yet never lost his soul. Into the small things he put his soul yet never had a small soul. Closely attentive to the material interests of his circuits he yet never became a mere official. With a true sense of the dignity of his office, he was yet humble as a little child. Loving the young he did not neglect the old, especially the sick. In helping young men in their studies he took a real delight, and a number who are serving the church as local preachers and ministers bear witness to his aptitude and success in this work. His preaching was marked by careful preparation and high purpose, ministering alike to mind and heart. Space will not permit quotation from the many testimonies which have been received as to his work and worth, but two words from these letters finely describe the man – “kindly,” and “kingly.” Such indeed he was. He leaves a widow, one daughter, and three sons.

Henry was born in September 1853 at Shotton, Co. Durham, to parents Robert, a coal miner, and Hannah.

Before entering the ministry, Henry also worked as a coal miner.

He married Mary Bell (abt1855-1895) in the summer of 1880 in the Durham Registration District. Census returns identify four children.