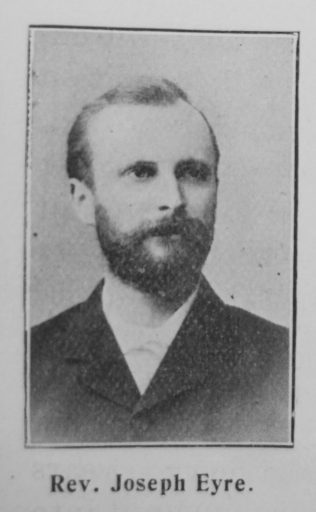 Transcription of Obituary In the Primitive Methodist Magazine by I. Dorricott

All those who knew Mr. Eyre intimately learned to esteem him, and many of us claimed him as a much valued friend. He has been cut down in the midst of his days, and in his premature decease the Connexion has lost a worker of great promise, an excellent speaker and preacher, and a clear headed, capable administrator. He had already revealed powers and qualities of a high order, but they were only the foregleams of what was latent in him. His was a life more of promise than of actual realisation. Phases of ministerial power and usefulness were waiting to evolve, and this, in some directions especially, was taking place in an unusual degree, as a brief reference to his earlier years will sufficiently illustrate.

Joseph Eyre was born at Ripley, Derbyshire, February 1st, 1868, and was thus 34 years of age. He received but an imperfect elementary education, having belonged to a poor, but respectable working family. At 12 years of age he began work in a coal mine, but soon afterwards went to Derby as an errand boy in a boot store, where he quickly developed aptitudes for business, which, with the good character he bore, ensured his early promotion. When about seventeen years old spiritual need awoke within him, and he was graciously led by the Spirit of God to surrender heart and life to Jesus Christ. His conversion meant much more for him than for the multitude of young people who join our churches. With the dawn of the new life came an increased sense of responsibility; he had talents which must be cultivated, and a call to Christian service which must be obeyed. But it also made him a better servant in his business, and by close attention and industry he revealed ability which won his master’s favour. Thus he became a traveller for the firm. He was for some time after his conversion a member with the Wesleyans, and within a comparatively brief period was engaged in conducting religious services. As a local preacher he ministered with great credit in Wesleyan pulpits. After awhile he became impressed with the intense earnestness and simpler methods of Primitive Methodism, and in 1892 applied for membership in our Kedleston Street Church, Derby. He soon took high rank among our lay preachers in the town, and was considered to have powers for a wider sphere. At the March quarterly meeting in 1894, he was recommended as a candidate for our ministry, and passed the examination in the following May. Shortly afterwards he became a hired local preacher on that most valuable training ground, the Clapton Mission.

His first ministerial call was to Belfast, where for two years he did excellent work, and made various warm-hearted friends. At the term of his service in Ireland he returned to be the colleague of Rev. Thomas Jackson, at Clapton. After completing his four years’ probation, he removed from London to the Dudley circuit, where he found a new kind of ministerial work. Instead of one pulpit, he had several, and in place of the city people he had the families of colliers and ironworkers. He was not at first fayourably impressed with the change; felt it especially irksome not to have any central pulpit work. The writer of this sketch strongly urged him not to form any decisive judgments till he had a fuller experience of his duties and of the people. He entered most earnestly into the various departments of the service of his station, but giving special attention to the church at Dudley Port. Here he was just commencing a forward movement, when the shaft of death came all too swiftly, and he left the work for other hands. Such are the inscrutable ways of the Great Master. But Mr. Eyre had had sufficient opportunity in this last sphere of activity to reveal powers for the various kinds of ministerial service which called for his attention, and which excited considerable pleasure and surprise. He was esteemed very highly among the circuit authorities for his work’s sake. Their resolution of sympathy and appreciation speaks eloquently of their estimate of our departed friend: “That we place on record our high appreciation of the Christian character, intellectual ability and manly bearing of the late Rev. Joseph Eyre, as manifested whilst labouring in our midst. And we assure his parents and all the other members of the family of our sympathy with them in their sad bereavement. We pray that the Divine Father will accord to them the rich consolation of His Holy Spirit, and thus help them to fully realise that God is their Refuge and Strength, a very present help in trouble.”

Mr. Eyre was not physically robust, though at the period of his entering on the work of the ministry he was in good health, and appeared to have an unimpaired constitution. His mental habits and activities, however, precluded great bodily vigour. He spent his strength in self-sacrificing service for his Divine Master, and has now secured the ample rest and reward. The transition came suddenly and was a great shock to his family and friends. An eight days’ illness, then the end of mortal strife! He finished his earthly course on Sunday, January 5th, 1902, pneumonia and pleurisy having wrought the mischief. To his most intimate friend, Mr. H. Banks, of Derby, and others, he gave emphatic testimony of his acceptance With God. “His death has cast a gloom over the Circuit,” wrote his Superintendent. Naturally, yes. But faith in the Eternal God and in the verities of our religion, and the assurance that our friend has been called to the painless life and the higher service, lighten the gloom.

Some of us who watched and aided his dawning powers, and expected to leave him behind in the full exercise of his high calling, still wander the desert, subject to the strange leadings of the pillar and cloud, having to note and record his ascent to the mount of God. Our friend has got his call before us, and has gone to the fuller employ of his ever-developing powers. All that remained of him was borne to Ripley Cemetery, on Wednesday, January 8th, after an impressive service in the Dudley Port Chapel, and there laid to await the great day of Restoration.

Joseph’s birth was recorded in the first quarter of 1869, not 1868. His parents were John, a coal miner, and Matilda.