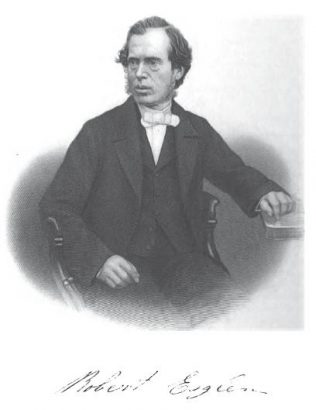 Robert was born on 15 November 1815 at Saham Toney, Norfolk, to parents John Eaglen and Esther Boreham. He had the benefit of a basic education at a local school. By God’s providence, Robert’s attention was awakened by the conversion of his sister, Mary Ann Eaglen, under Robert Key’s ministry in 1832. Such was the change in her, that it caused her brother to attend many of the evangelistic meetings, too, as an earnest seeker. His moment of awakening began through the kindness of a recently converted farmer, who saw the anxiety on this young man’s face. He invited him to his home for tea, and during the meal he explained to him the way of salvation. It is not uncommon for the newly-saved to want to share their faith with others, and it is a fact that many a conversion began with a meal.

Robert first became a prayer leader, and was then invited by Robert Key to the September 1832 Preachers’ Quarterly Meeting, where he was introduced as follows: “There is a lad here, which hath five barley loaves, and two small fishes. He will now address you.” By then, he was but seventeen years old; and yet his preaching proved itself by a number of converts, which led in due course to his becoming an itinerant minister.

Robert was preaching in Colchester on 6 January 1850. In the congregation was Charles Haddon Spurgeon, aged 16, who was converted that day. Spurgeon went on to become a renowned Baptist preacher.

Danzy Sheen, who wrote his obituary, described Robert as “below average stature, and until about forty years of age, remarkably thin, pale and hollow-looking”. His health was never particularly good, so much so that it was said in his obituary that there were occasions when his physical sufferings made him unable even to stand in the pulpit. In due course the strain brought about his reluctant superannuation in 1872. He became active again some three years later.

The net increase of souls brought to the Lord under his ministry was 1,072.

Robert died on 24 September 1893 at Manchester.