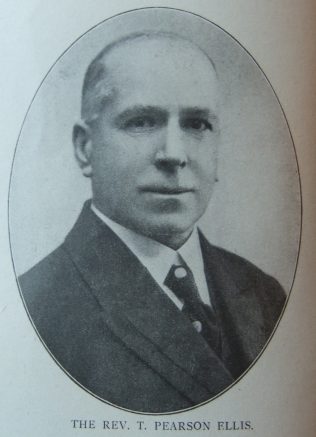 Thomas was born in 1869 at Gateshead, Co Durham, to parents George Ellis and Margaret Pearson. George was a boiler-smith by trade, but went on to serve on the Council becoming an Alderman. He later became a glass and china merchant. Thomas was baptised on 1 July 1869 at Gateshead.

Thomas joined the Victoria Road Church at the age of fourteen and soon became Sunday school secretary. At the age of twenty he was a local preacher.

Thomas was apprenticed to a carpenter.

As a preacher Thomas was earnest, practical, and intelligible. While he did not startle his hearers by novelty, nor bewilder them with misty speculations he maintained a high level of pulpit efficiency. His mind was open to the religious thought of the time and in clear and concise speech he uttered the message given to him.

Whilst at Batley, Thomas initiated a series of lectures and obtained the services of the most outstanding preachers and theologians of the day.

Thomas was a passionate advocate of overseas missions and served as Missionary Secretary in both Carlisle and Whitehaven and Grimsby and Lincoln Districts.

During WW1, Thomas maintained a regular correspondence with scores of young people who were away in the Forces, and was regarded by them as a trusted counsellor and friend.

Thomas married Hannah Thompson (b1875) in the summer of 1900 at Wigton, Cumberland. Census returns identify one child.