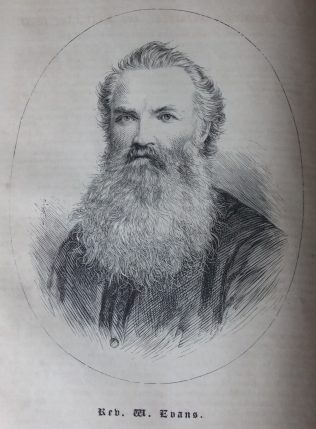 William was born on 24 July 1828 at Muckleton, nr Shawbury, Shropshire. William’s mother died when he was three; his grandparents took charge of him. William’s father was among the first members of the Buttlers Bank Society in the Press Green circuit.

William was converted aged 15 when attending a week-night prayer meeting. Prayer was an essential focus of his life thereafter and quickly led him to supply for class leaders and local preachers. He was called into ministry by his own circuit before he had been raised to full plan.

William’s obituary records that he built 22 new chapels; improved, altered or enlarged a further 21 chapels; built 12 new schoolrooms; built 2 ministers houses. To these projects he raised a total of £16,200. He was involved in missioning 28 new places. Overall there was a net increase of over 1,100 members on his stations.

William was a progressive preacher, always faithful to the Word of Truth, and preaching plain truth for practical results. He was never stagnant or dull; and the influential circuits that he ministered in his later years testified to both freshness and fruitfulness.