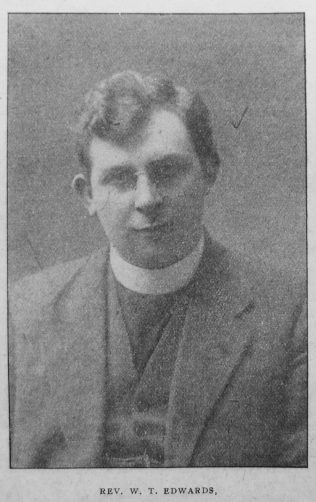 WILLIAM THOMAS EDWARDS: born at Walsall Wood in 1889. His home was one where religion was life. The Church and its activities had first claim on the whole family. It was therefore only natural that one of its sons should offer himself for the ministry. He entered Hartley College in 1916 after one year in circuit work, began his ministry at Leighton Buzzard and served in the following towns: Sutton, Nottingham, Exmouth, Redruth, Northampton, West Bromwich, Cannock Chase, and Chester. He removed to Willenhall in 1954, and had hoped to render at least five years’ service there; but it could not be. Throughout his ministry he served his Lord with all his might. His home training was seen in the whole of his activities. He lived for his church and his people. Wherever he laboured progress was soon manifest, and however long his stay no circuit was willing to let him go. He was a brother beloved, a great pastor and teacher, as well as a preacher of considerable merit. In all things he was most methodical and thorough. He was a diligent student, always seeking further light on the eternal truths. Every sermon was carefully written in full. He endeavoured to make one new sermon each week, and this practice he continued to the very end. He could never be charged with staleness or slovenliness. He was always on the alert to harness the energies of his young people, and where there was promise of preaching ability he became a splendid tutor. He was a great soul, a grand colleague and friend. After a brief illness he was called to the Homeland on 25th November 1956, at the age of sixty-seven, in the forty-first year of his ministry.

William was born in 1889 at Walsall Wood, Staffordshire, to parents William Thomas and Hannah. William, senior, was a coal miner.

Before entering the ministry, William worked as a clerk to a brick manufacturer.

His probate record identifies that William was married to Emma.

William died on 25 November 1956 at the Manor Hospital, Walsall, Staffordshire.