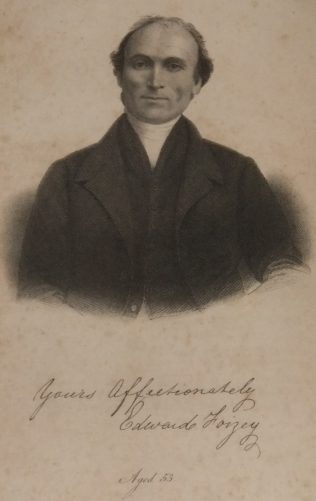 Edward was born in 1796 at Wellington, Shropshire.

Edward was converted at Ragfield, Shropshire. He became a local preacher in 1823. He is a recognised pioneer of the work in North Wiltshire, where he and his colleagues suffered many persecutions in their work. He was particularly roughly treated at Malmesbury.

In or about the year 1831, during the superintendency of Edward Foizey, the last two societies that had clung to James Crawfoot and held aloof from Primitive Methodism, sought union with the Ramsor Circuit. The societies were at Waterfall and Caldon, and their co-lay-pastors were Thomas Mottram and Joseph Bratt. The event, interesting in itself as the healing of a breach, is still more so, because it gave to the Connexion Thomas Mottram, no ordinary man.

In Chippenham, Edward’s ministry was highly esteemed and very successful. Four chapels were built in his time in that circuit.

His obituary records that he was a good preacher, plain, practical and faithful. His discourses where characterised by originality, logical acumen and sparkling wit. Edward was a zealous and able advocate for the temperance movement. He wrote a number of hymns in the PM hymnbook.

Edward took the unusual step of ‘retiring’ rather than superannuating. The 1861 census records him as a grocer and local preacher.

In retirement Edward ran a grocery business with his wife.