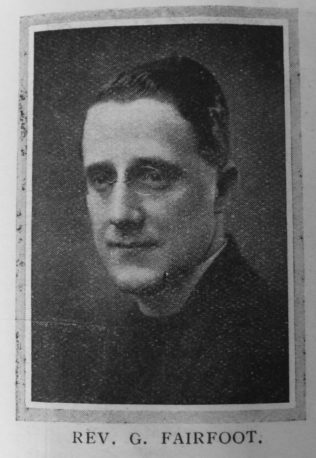 GEORGE FAIRFOOT: born at West Hartlepool in 1900. After training at Hartley College he entered the Primitive Methodist ministry in 1924 and served in the following circuits: Leicester III, Derby II, Worksop, Sheffield (Carver St), Blackpool (South), Croydon, London (Lewisham), Derby (East), Chichester and Bognor. He had a fine independence of mind which was nurtured by wide reading and a deep interest in people and their needs. With his ready wit and lively personality he proved to be a popular and challenging preacher and he excelled in his ministry to young people. He became intensely interested in a variety of social questions and in all discussions about reunion of the Churches and would wax hot in debate with those whose views he did not share, but always without bitterness. His friendliness left no room for that style of reaction.

During the latter part of his ministry he began to be handicapped by arthritis which brought increasing disability and severe pain. For many men this would have meant the end of active service, but in a measure it brought a new dimension and urgency to his ministry. To ascend and descend the pulpit steps was an agony and to fulfil his pastoral work on a bicycle was a daily miracle. But he never failed in his duties, indeed he went far beyond what could have been expected and his fine example presented a challenge to all who knew him. All his members and every known adherent were visited once a quarter. Moreover, in his last circuit, in casual contacts on the sea front and in nursing homes, he befriended many lonely folk who had no relationship at all with the Church. Thus his genius for caring and serving, despite the handicap of his affliction, became a legend in his own lifetime.

Eventually his illness compelled him to retire from the active ministry and the last years of his life were marked by increasing disability and continuous pain. Walking was out of the question. Even to be touched was an agony. Ultimately a long period in hospital tested to the limit his resources of fortitude and faith, but cheerfulness was always breaking in. He retained his smile to the end, his piercing insights and rapier wit, his interest in the Church and in people. All who visited him found themselves challenged and inspired by the way in which his acceptance of the fellowship of Christ’s sufferings was translated into amazing courage and serenity. He died in Bognor Regis Hospital on 28 February 1971, in the seventy-first year of his age and the forty-seventh of his ministry.