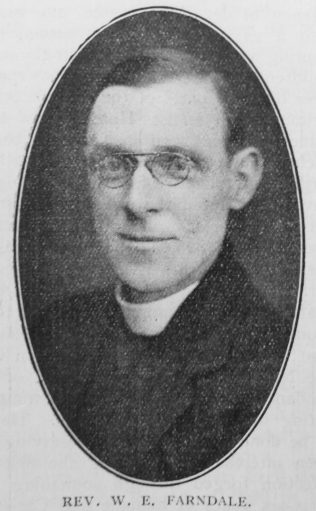 WILLIAM EDWARD FARNDALE, D.D.: born at York in 1881, he entered the Primitive Methodist ministry in 1904 after training at Hartley College. He travelled in the following circuits: Forest Hill (London), Oldham II, Chester-le-Street, Birkenhead Il and Grimsby II. In 1933 after the coming of Union he was appointed District Missionary and Chairman of the Lincoln and Grimsby District, a task which occupied the remaining nineteen years of his active ministry. As President of the Conference in 1947 he sounded the Call of the Countryside and launched a “Back to the Soil” campaign. The whole Church then saw the secret of his authoritative leadership in the Lincolnshire area, where his administrative gifts were matched by pastoral care and a love for country Methodism and the farming community.

He always came to grips with contemporary affairs and applied the gospel to them. His ministry at Birkenhead during the decade following the end of the First World War illustrated this vividly. His incisive preaching both within the churches and in the open air was a counter to post-war disillusion and, later, to the demoralising effects of unemployment, During his Presidency he attended the Methodist Ecumenical Conference in Springfield, Massachusetts, U.S.A., and went as a visiting preacher to the United Church of Canada, during which time he received from Victoria University, Toronto, the honorary degree of Doctor of Divinity. He was a convinced Free-churchman, as his published writings testify, and was in his element in 1950-51 as the Moderator of the Free Church Council.

On his retirement from the active ministry in 1952 he became a tutor at Cliff College, where his biblical scholarship was placed at the service of many grateful students. Then came the years of physical infirmity which only served to throw into greater relief his indomitable spirit. He remained an omnivorous reader and kept abreast of current affairs, always (to quote his own words) ‘‘seeking  recourse to the Head of the Church through prayer”, and was ever ready with his characteristic friendly counsel to assist and encourage ministers and laymen alike. His spare figure and twinkling but penetrating glance will long be remembered by many who found wisdom and grace in his presence. His mind was clear and active and his spirit buoyant until the time of his death on 4 February 1966, in the eighty-fourth year of his age and the sixty-first of his ministry.

William was born on 24 September 1881 at York, Yorkshire, to parents William, a town missionary (1891) and Mary Jane.

He married Florence May Price (1877-1964) in the spring of 1910 at Sydenham, London. Birth records identify two children.

He was President of the Methodist Conference in 1947.