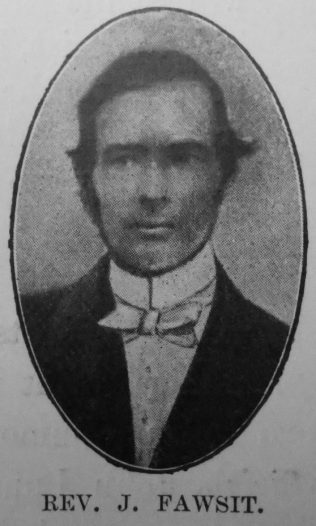 As a circuit, Malton has had a continuous and steady-going existence since 1822. Until the formation of the Leeds District in 1845, it stood in right chronological order on the stations of the Hull District, just after Pocklington and Brotherton, i.e., Pontefract, Circuits. Though Pickering was made a circuit in 1823, the arrangement was premature, lasting for that year only, and it had to wait until 1842 before it was again granted circuit independence. The parent circuit was left with two preachers and 470 members, while Pickering began its course with 347 members and three preachers, of whom, it is interesting to note, John Fawsit was the third.

It would be unpardonable were this history to contain no further reference to one who, as an ardent and gifted Bible-student and author, deserves to be ranked with J.A. Bastow and Thomas Greenfield. They are few indeed still surviving who remember his bright personality and his enthusiasm for learning; for he died in 1857 at the early age of thirty-seven, just, when his literary powers were ripening, But though J. Fawsit died comparatively young, his application had been so intense that several books came from his pen that deserve to live. The best of these are “The Sinner’s Handbook to the Cross” and “The Saint’s Handbook to the Crown,” the latter revised for the press on his death-bed. These books are written in a devout practical spirit, give evidence of wide reading, and in the allusiveness and occasional quaintnesses of their style remind us of some of the lighter Puritan writers.

J. Fawsit was born at Scotter, and entered the ministry in 1841, the same year in which J. Bootland, J.R. Parkinson, D. Ingham, and J. T. Shepherd, well-known preachers of the old Hull District, began their toil. After travelling at Retford, Leeds, Malton, London, and Bradwell, he settled down at Wellow in the pleasant Dukeries, and did good service to the Connexion to which he was so attached. To no one whom we have known—certainly to no Primitive Methodist—would the title, “‘The Earnest Student,” be more appropriate. He was not born to affluence. He had to labour for the support of his family, and, next after his religious duties, he made that his chief business, but books he would have. One of the most vivid impressions of our boyhood is the mental picture of his large library, with Sir Walter Raleigh’s “History of the World” standing out among the rest (a title that struck our youthful mind as a tolerably large order).

But J. Fawsit was no mere book-worm: he was a student. The writer of his memoir says truly:—
“His love of knowledge was a passion, and it never cooled. . . His application was most intense and protracted. At three o’clock in the morning, in the depth of winter, his lamp might have been seen burning; indeed, till weakness compelled him to desist, he spent very few hours in bed. He was a self-taught man, and did honour to that class of individuals who undertake to educate themselves. He travelled much, and had acquired the habit, not only of reading as he walked, but of writing too; the first draft of much that he published was first put on paper in this way.”

John was born on 14 December 1820, to parents Thomas and Mary. He was baptised on 16 December 1820 at Scotter, Lincolnshire.

The 1851 census records John as a bookseller and tea dealer.

H B Kendall, Origin and History of the PM Church, vol 2, p89