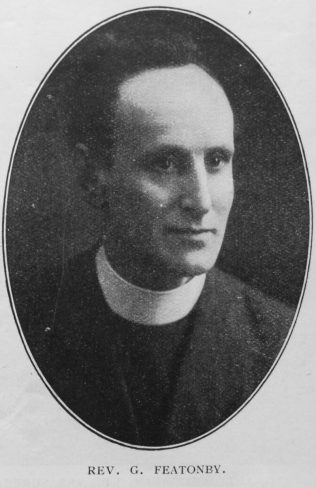 GEORGE FEATONBY: born at Castle Eden, Co. Durham in 1876. He was recommended as a candidate for the Primitive Methodist Ministry by the Jarrow-on-Tyne circuit, and entered Hartley College in 1904. His ministry began in 1906, and his circuits were: Crewe, Buckley, Blackburn, Tarporley, Stoke and Longton, Hetton, Talke, Bradford, and Colchester. In 1929 he was appointed Secretary to the Connexional Orphans Home Committee.

In an extremely difficult time of widespread industrial depression and social discontent, he put all that he had into the work of the Homes, but the strain was such that he was compelled to rest, superannuating in 1935. During the war period he felt it to be his duty to take up the active work again, and from 1941 to 1945 he was stationed in Crewe. He intensely believed that only the best is good enough for the service of the Kingdom of Christ, and it was ever his earnest desire to help people in their hour of need.

In 1945 he retired to Whitley Bay. His eventide was darkly shadowed by the illness of his wife. He passed peacefully away on 8 March 1959, on the eve of his eighty-third birthday and in the fifty-third year of his ministry.

George was born 11 March 1876 at Castle Eden, Co.Durham, to parents Thomas, a coal miner, and Alice.

Census returns identify the following occupations for George before he entered the ministry.