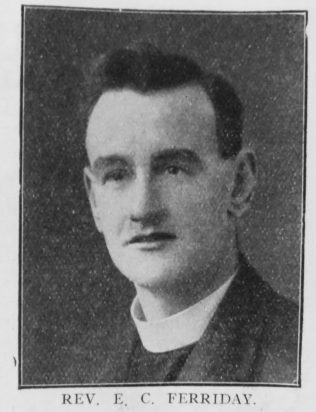 ERIC CLARKE FERRIDAY: born on 2 September 1901, at Madeley, Shropshire, where his father, a third generation Methodist minister, was serving. He received his education in local schools wherever his father was stationed. His lasting love of music and competence as an organist began in those early days. His love of the sea made him leave school on matriculation at the age of sixteen during the First World War and join the Merchant Navy as a cook. Here he felt the call to preach and when he delivered his first sermon in the St Austell area, his old ship’s captain and crew, unbeknown to him, were standing in the porch outside listening to the whole service. So the three most formative influences of his life, love of his fellow-men, music and the sea had found expression in him.

In 1920 he was accepted as a candidate for the ministry and after three happy years in training at Hartley College, travelled in Abertillery, Kingstone (Herefordshire), Pateley Bridge, Stockton-on-Tees (Paradise Row), North Shields, Helmsley, Hull (East), Scarborough (St Sepulchre St), Stoke-on-Trent (Stoke), South Petherton. From 1940 to 1945 he served in the various postings and attachments of an Army Chaplain on Active Service with the 8th Army under fire in Egypt, the Sicilian and Italian landings, in charge of Wesley House, Naples, and in Germany. He was mentioned in dispatches. These experiences burned deep into his mind and influenced the rest of his ministry.

His compassion for his fellow-men found material expression during the ‘terrible days’ of the General Strike, and later in work for the unemployed men of the north-east where he set up workshops to employ the skills of those men in making toys which he peddled round the area, using the money to help in particular needs. As an organist he formed a most successful choir at Helmsley. As an evangelist he was deeply committed to the Christian Commando Campaigns, especially in Hull. As an ecumenist he was President of the Scarborough Free Church Council; his army experience had taught him that narrow denominationalism has nothing to say to men in deep trouble. In South Petherton his health began so to deteriorate as to force his early retirement to the Isle of Wight in 1966, where, greatly loved, he took part willingly in the work of the circuit as health permitted till he died on 24 June 1970, in the sixty-ninth year of his age and the forty-seventh of his ministry.

Eric was born on 2 September 1901 at Madeley, Shropshire, to parents Jonah Grieves Ferriday, a PM minister, and Elizabeth Clarke.

He married Miriam Rose Jackson (1901-1963) in the spring of 1926 in the Depwade Registration District, Norfolk. Records identify one child.

He married Elizabeth Gladys Purse (1903-1984) in the spring of 1964 in the Taunton Registration District, Somerset.