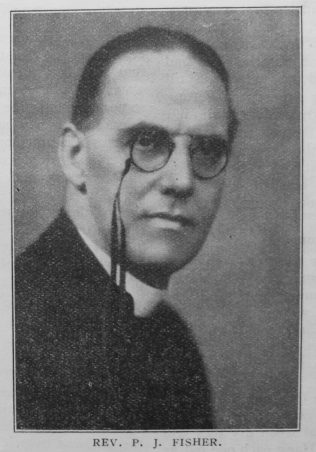 PHILIP JOHN FISHER: born at Maidenhead in 1883. He was educated at Evesham and Cheltenham Grammar Schools and entered the Primitive Methodist Ministry in 1905. He was trained at Hartley College and served in Hull, Docking, Tarporley, Liverpool, Kingston-on-Thames, Middlesbrough, North Shields, Crewe, and Teddington. During the first World War he served for four years as chaplain to the forces in France and Flanders. He was editor of the Methodist Leader from 1930 to 1933, and co-editor of the Methodist Times and Leader from 1933 to 1937. In 1950 he became a supernumerary and went to live in Woking, where he remained to the end of his life.

He was a prolific writer and his books of devotion brought untold blessings to many. His reviews of the writings of others showed his catholicity of spirit and bore the touch of a master. A deep passion for the souls of men was expressed in his concern for world missions, and for some years he was chairman of the Western Committee of the Missionary Society and also served on the General and Candidates’ Committees. As a member of the Faith and Order Committee, he brought all the wealth of his keen mind and deep devotion to the spiritual life of the Church.

He was a faithful preacher of the Word, giving his hearers new understanding of the Scriptures and relating the Gospel to the contemporary situation. As a pastor he was a true shepherd of the flock, and his prayers in and out of church revealed his intimacy with his Lord. During his retirement he was at once an elder statesman and brother to whom all were glad to go for fellowship and counsel. In the business and devotional meetings of the church and circuit he gave unstintingly of his wide experience, his well-stored mind, and his deep devotion. Both laymen and ministers were enriched by his life and counted it a privilege to be his friends. All who knew him thank God for every remembrance of him and rejoice in the example of a life which was truly his with Christ in God. He died on 6 July 1961, in the seventy-eighth year of his age and the fifty-sixth of his ministry.

Philip was born on 30 August 1883 at Maidenhead, Berkshire, to parents Jonathan, a superintendent with prudential Assurance Co (1901), and Elizabeth.

More about his time as a Forces Chaplain can be found by following the link to this page in the First World War Chaplains category.