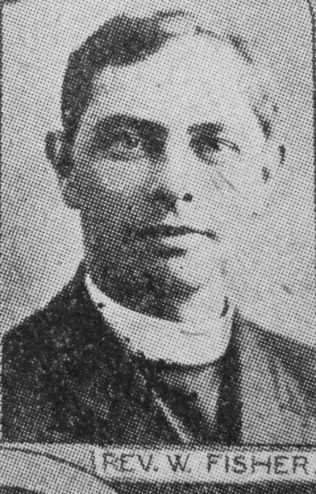 WALTER FISHER: born in Lydiard Millicent, Wiltshire on 11th March 1889 of fourth generation Primitive Methodist parents, next door to the Primitive Methodist chapel where he was baptized by his grandfather who was a local preacher. Thus born into and bred in methodism he grew in faith and understanding, developing a warmth of personality and care for people that were to serve him well throughout his ministry. He became a church member at the age of fourteen and prior to his candidature when twenty-two he held several offices in the church including that of Trustee. After training in Hartley College, he filled vacancies in a number of circuits during probation and was ordained at North Walsham Primitive Methodist Church in 1921. He then served in the following circuits: Manchester (I), Cleethorpes, Lowestoft and Beccles, Bournemouth (I), Radstock, Wirksworth, Tetney, Andover, Castleford (Bradley Street), Midsomer Norton, Calne, Marazion, and Portland. As a  supernumerary he served in the Leighton Buzzard, Birmingham (Elmdon) and London Mission (South) Circuits.

During his time in Wirksworth he served as representative of the Derbyshire County Council on the Board of Governors of Wirksworth Grammar School and on the Board of Management for Council Schools. In Calne he devoted much of his energy to youth work being representative of the National Free Church Federation on the Wiltshire Youth Committee. He was foundation chairman of the Calne Youth Council Committee for the Town Youth Centre. He was also a member of the Town Community Council. Several members of his Youth Club entered the ministry.

His wife died in August 1962 after forty-one years of happy marriage. He remarried in 1963, Elsie M. Brown, with whom he enjoyed eighteen years of happiness. He died on the 15th January 1981 in the ninety-second year of his age and the sixty-fourth year of his ministry.

Walter was born on 11 March 1889 at Lydiard Millicent, Wiltshire, to parents George Fisher, a boiler maker at GWR works (1891), and Susanna Moore.

Before entering the ministry Walter worked as a gentleman’s outfitter’s assistant (1911).

He married Mildred Ellen Wallis (1892-1962) in the spring of 1921 in the Cricklade Registration District, Wiltshire. Records identify one child.

He married Elsie M Brown in the spring of 1963 in the Lambeth Registration District, London.