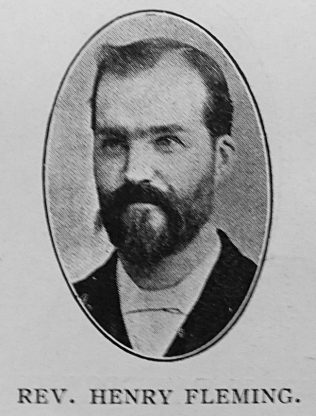 Transcription of obituary published in the Primitive Methodist Magazine by W.A.H.

Henry Fleming was born at Wingate, near Durham, December 3rd, 1861, and passed away to rest, after a prolonged and painful illness, on August 25th, 1910, at the comparatively early age of 49 years. During those years he crowded into them such service as made his life “one long and splendid day.” At the age of seventeen he was led to make the great decision. Whilst attending a cottage prayer meeting his soul was greatly stirred by the pleadings of saintly men, and there and then he gave himself to Christ. His early advantages were not many, for at the age of ten years he was compelled by the exigencies of home to work in the mine, and at eleven years of age was earning his ten shillings per week. But under those conditions the craving for knowledge possessed him. He yearned to know in order that he might become fitted for wider service. He knew that God had other work for him to do. His zeal and earnestness soon won the notice of others. Before long he was called to bear testimony to Christ, and so commended himself to those who knew him best that he was not only placed upon the Circuit plan but recommended by his Circuit for the ministry of our Church. One day, whilst engaged in the mine, a telegram reached him informing him that an opportunity had occurred for him to enter our College at Manchester. Next day he set forth on his new career, and nobly fulfilled the call that came to him.

He had a great passion for study. His was the contemplative mind. He was not content to store up facts within his mind, he pondered deeply on the great problems that came before him. This gave originality to his ministry and made his preaching fresh and attractive. He was called to labour on somewhat wide and extensive Circuits, but he never faltered. His probation was spent on Biggleswade, Saffron Walden, and Hounslow Stations. On the completion of his probation he was stationed at Haverhill, and gave such proof of his ability to serve in difficult situations that henceforth he was called to grapple with difficult positions.

On Cambridge 2nd he spent four successful years of strenuous labour, at Harwich he toiled for five years with splendid results. Asked by the District Committee to undertake Clacton Station when in great difficulties, he willingly did so, and during his five years’ ministry there built the present church and school premises. Then followed three years on the Balham Station, and one brief year at Grays and Romford.

He was a well-built, strong and vigorous man. Years of service seemed to be before him, but in some mysterious way sickness smote him down, and in the prime of a full manhood he quickly passed away. He belonged to a race of ministers of great creative power. Not content to build a upon another man’s foundation, he was ever restless to lay new foundations for himself. He was a diligent student, a good preacher, a faithful pastor, and a firm friend. Tender-hearted, he rendered ready help to those whose need came before him, and frequently impoverished himself to render aid to others. He was a good man. His memory is precious to many. He rests from labour, but his works follow him. His voice is silent, but he yet speaks. Our Church is the richer because of his ministry, and many a life is nobler because of the service he rendered.

In the beautiful cemetery at Grays he was tenderly laid to rest by a large number of ministerial brethren and friends, Revs. J.D. Thompson, J. Ritson, W.A. Hammond, and J. Cooper taking part in the service. Great sympathy was expressed for the widow and family, who deeply mourn their loss. In service he was more abundant, in pain and suffering he was calm and trustful, in death he was confident and victorious. His final message was: “Fear not, for I am with thee.’’

Rev. J. Johnson preached a memorial sermon, Sept. 4th, to a large congregation, whose presence testified to the respect in which he was held in the town.

Henry was born on 3 December 1861 at Wingate, Co. Durham, to parents John Fleming, a coal miner, and Ellen Ann Barkley.

He married Jennie Friend Harrison (b1870) in the summer of 1890 in the Durham Registration District, Co. Durham. Census returns identify two children.

Henry died on 25 August 1910 in the Southwark Registration District, London.