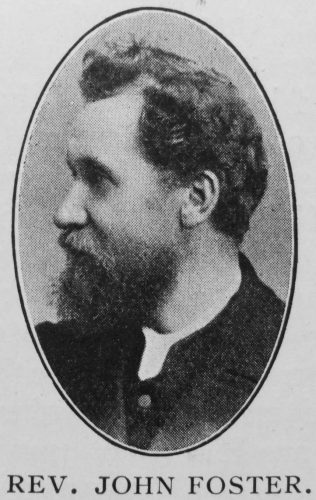 The Rev. John Foster, after a brief illness, passed to his reward on Sunday, the 15th of May, and in his departure the Church has lost an evangelist of quenchless zeal, a pastor dearly beloved by his people, and a man whose life was a constant adornment of the Gospel of God, his Saviour.

In early life his health and strength were such that he seemed unconscious of fatigue, but so urgent were the demands of his eager, enthusiastic spirit, that he had not got much beyond the period of middle age before the signs of physical decline began to manifest themselves; and he had not reached the close of his 56th year before the earthly house of his tabernacle was dissolved and his spirit ascended to the house prepared for him above. Though prodigal of his powers, however, he was not wasteful, for every ounce of his magnificent energy was freely expended in the service of his divine Master.

He was born at West Wylam, near Newcastle-on-Tyne, and entered the Sunderland Theological Institute in 1874. At the Conference of 1875 he was stationed at Doncaster, and it is remarkable that until he accepted Stockton last year he never travelled in any station beyond the limits of the Hull District as it was when he entered it. He laboured twice in the town of Hull, twice in Grimsby, and twice in Scarborough, his other stations being Mexborough, Market Rasen, and Bridlington. The fact that his services were in such great demand, where he was best known, speaks volumes as to the hold he had obtained over the affections of the people.

Nor was this surprising, for he was a charming personality. He was saintly without being censorious, and there was about him a winsomeness and overflowing kindness that won all hearts. Besides this, he was a pulpit orator of no mean order, and he will always be held in reverence for his success in winning souls. Possessing a fine voice and fluent delivery, fine voice and fluent delivery, few men could move an audience more powerfully than he.

Mr. Foster worked to the last. Though often in great pain and weakness, he never betrayed his suffering and never slackened his work. He visited incessantly, and there was every indication of a coming revival; but he was not permitted to reap the fruits of his labours. On the Friday morning when he ought to have gone to the District Meeting as delegate, he was too ill to leave his bed; but it was not until a few days before his death that anything serious was feared. He himself seemed to be buoyed up by the hope that he would be raised up again to see a great revival of religion, but in the end his sun set in a glorious light. The loved ones gathered round his bed will never forget the smile that overspread his countenance as he passed away.

His body was laid to rest at Keswick, a town he dearly loved to visit; on the night preceding its departure an impressive memorial service was held at Bowesfield Lane, Stockton, and the church’s farewell showed how deeply their pastor, in a few brief months, had entrenched. himself in their affections. A widow, two sons, and two daughters are left, but “To live in hearts we leave behind is not to die.”

John was born in 1854 at West Wylam, nr Newcastle-upon-Tyne, Northumberland.

He married Mary Elizabeth Carrick (b1856) in the summer of 1879 in the East Ward Registration District, Westmorland. Mary was a daughter of Thomas Carrick, a PM minister. Census returns identify four children.