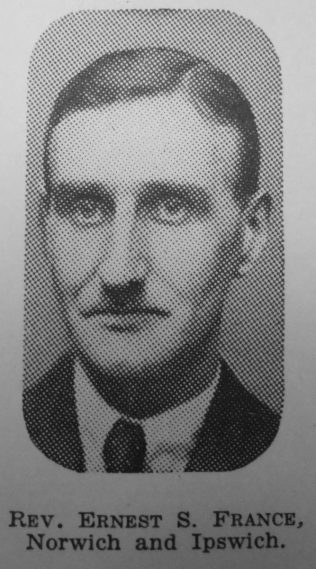 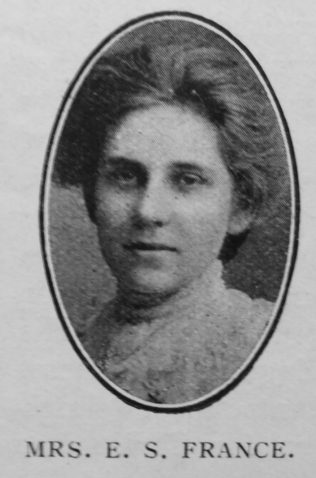 ERNEST SPOONER FRANCE: born at King’s Lynn in 1885. He was a son of the Manse and was educated at schools in Ipswich, Norwich, and Lowestoft, where his father, Francis C. France, was Minister. He served his apprenticeship as a printer in Wymondham where he came under the influence of the Rev. A.T. Wardle and offered for the Primitive Methodist Ministry. He went to Hartley College in 1905 for two years. He subsequently served in the following circuits: Ipswich, East Dereham, Wangford, Acle (two terms), Martham, East Suffolk, and Bourne, retiring to Norwich in 1946.

Apart from his time at Bourne he spent his whole ministry in the East Anglia District and was the Synod Secretary from 1932 to 1938. He was a keen sportsman and in his earlier days he played football and cricket for the local teams in the places where he was Minister. In his retirement he was a familiar figure at the Victoria Bowling Club in Norwich and was for a year its President. He had a great love for music and delighted in conducting, especially Cantatas. All his life he was an avid reader and this greatly enriched his preaching. His courtesy and kindness made him one of God’s gentlemen. In his retirement he became the Free Church Chaplain at St Andrew’s Hospital, Norwich, where he exercised a wonderful ministry for seventeen years.

He is remembered in all his circuits for his preaching and administrative gifts, but nearest his heart was the Pastoral Office, and many found in him a true friend and spiritual guide. He relinquished his duties, only in 1967, on account of failing health. He cared for his wife during her years of ill-health, and within six weeks of her death he had to be admitted to hospital himself. At his own request he was transferred to St Andrew’s Hospital where he was nursed during the remaining nine months of his life. He died on 9 December 1968, in the eighty-fourth year of his age and the sixty-first of his  ministry.

Ernest was born in 1885 at Lynn, Norfolk, to parents Francis Coates France, a PM minister, and Jane Spooner.

He married Hilda Sutton (1887-1968) in the spring of 1911 in the Blofield Registration District, Norfolk. Records identify one child.