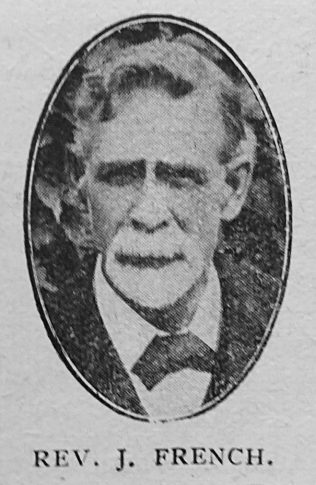 The Rev. John Redhead French was born at Whoplow Drove, Nr, Crowland, in 1841. One of his relatives gave the site, a corner of her orchard, for the erection of a chapel. When he was about four years old his family removed to Crowland, and later, when he was ten years of age his father, who was a coal merchant, went to live at Nottingham.

When he was eighteen years of age he was converted in the Old Lenton Chapel, Nottingham II, under the preaching of Mr. V. Saxton, who was a local preacher. Among his companions at this time was the Rev. Hy. Roe, the Fernandian missionary. He was very much influenced by the Revs. John Dickinson and S. Antliff, and was called into the ministry by their recommendation in 1865. He served his probation in the Lutterworth and Rugby, Stratford-on-Avon, Hammersmith and High Wycombe Circuits. For forty-four years he was in the active ministry and travelled on eighteen circuits—at Bottesford twice.

He was tall and dark in appearance and had a very strong physique which stood him in good stead in the long and laborious journeys which fell to his lot. He was well read in English literature, master of a very unusual vocabulary and painstaking in the preparation of his sermons. He was evangelical in his preaching, and saw much success in his ministry. He was a good pastor and welcome in the homes of the people, possessing a gracious manner and an old-time courtesy.

The Rev. C. Lomas, who was his colleague, says: “He had a quiet reserve and a thoughtful mind, he managed his officials and circuits successfully and well, never calling in outside suggestions or influence. He lived and laboured for God and His church, and people; never seeking district or any other office, continually striving for the salvation of men.”

He was not a chapel builder in the usual sense of the word, but new churches were erected during his ministry at Lavingdon, Ampthill (Bedford), Whitchurch and Micheldever Circuits. He had the esteem and confidence of his brethren in the ministry, and the love of his people wherever he laboured. He walked thousands of miles and preached with great profit, for nearly sixty years, the Great Evangel. He was wise in counsel and faithful in friendship—a man of God and a hard-working circuit minister and one of the  builders of rural English life. He was spared to have a long eventide.  Superannuating in 1909, he settled first at Nottingham, and assisted the Rev. James Flanagan at Canaan Street, and later he laboured at Cobden Street (Peterboro II) and then at Star Road (Peterboro I).

About four years ago he came to live at Eynesbury, in the St. Neot’s Circuit, and for two years preached several times each quarter. He made many friends and during his long illness he was ever glad to see them and hear about the Church’s prosperity. He passed peacefully away on December 10th, 1925, and a full church at the funeral service at Eaton Ford, showed the great esteem in which he was held. Rev. E.W. Lees conducted the service, the Rev. W.B. Bache gave the address. Rev. W.T. Hosier, representing the General Committee, in a most beautiful prayer commended the widow to the care of our Heavenly Father. Rev. H.P. Ellis, who represented the London I District, read the lesson and prayed at the grave in St. Neot’s Cemetery. The committal was read by the Circuit Minister, who also preached the memorial sermon on the following Sunday, in our Eynesbury Church. Our deceased brother leaves a widow, one daughter and two sons, one of whom, the Rev. E. J. French, is at High Wycombe.

John was born in 1841 at Whaplode Drove, Lincolnshire, to parents William and Sarah.

The 1861 census records John as a bleacher.