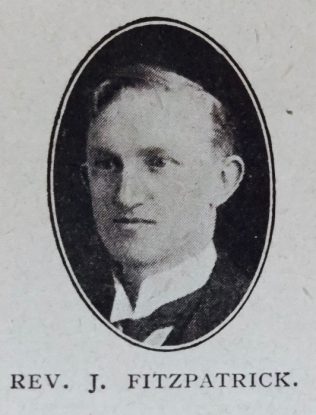 JAMES FITZPATRICK was called home to God on the morning of February 7th, 1919. On Sunday, February 2nd, he preached in the morning at Consett church. The sermon was spoken of as a fine effort marked for spiritual insight, lucidity and beauty of diction. It was his last sermon, he never preached again. In the afternoon the doctor was in attendance, and perceiving the gravity of the case a consultant from Newcastle was called in, and a trained nurse was engaged, but in spite of all that medical skill and good nursing and love could do he passed away on the Friday morning. He was not for God took him. Mr. Fitzpatrick was 35 years of age, and leaves a widow and two children. He had been in the ministry 13 years. Born of godly parents his heart turned to truth in his youthful days. He was sent to the Manchester College from Chester-le-Street Circuit. He spent his probation in Suffolk, then three years at Whiteinch Pastorate, Glasgow, then five years in Gateshead II. By special arrangement at the Northampton Conference he was put down to Shotley Bridge Circuit for one year, in consequence of the death of William Pickering, B.D., and was due to go to Newcastle II. in July, but God willed otherwise. James Fitzpatrick was a strong personality, and could face difficulties with a determined and courageous spirit. He possessed mental and moral strength of an unusual order. He was a student, a great reader of modern literature and philosophy and poetry. He excelled as a preacher, and some of his sermons are worthy of a permanent record. He was a loyal colleague. A safe man with a wide outlook, and with a remarkable shrewd judgment respecting men and things. His conclusions in most matters were worthy of respect. The esteem in which he was held by his brethren and the public was evidenced by the large concourse of people who attended the funeral. The funeral took place at Elswick Cemetery; prior to the interment an impressive service was held in our Kingsley Terrace Church, Newcastle. The Rev. Charles Crabtree and the Rev. Wm. Dawson, college friends of the deceased, took part in the service. The Rev. G. Armstrong, District Secretary, voiced the sympathy of the General Committee, and also that of the Sunderland and Newcastle District. The Rev. Henry Pratt conducted the service and delivered the appreciation. We laid to rest, amid expressions of profound sorrow, our friend and colleague, a young life of great promise, and of a type that we can ill spare in these strenuous days. — HENRY PRATT.

James worked as a joiner before entering the ministry.

James married Dorothy Ann Chambers (1883-1963) in the spring of 1910 at Newcastle-upon-Tyne. The obituary above identifies two children.