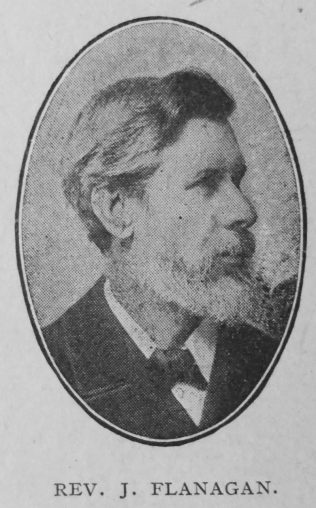 THE announcement of the death of the Rev. James Flanagan came as a shock to a large circle of friends, although his passing was for some time expected, for malignant disease had stricken him low. Born at Mansfield, Nottinghamshire, December 18th, 1851, he finished his life’s strenuous work March 31st, 1918, at 20, Patrick Road, Nottingham, in his 67th year. The passion for preaching was born within him simultaneously with the impulses of a new life which was begotten in him on the day of his conversion. This outstanding epoch occurred when he resided at Ilkeston, in the county of Nottingham, and determined the current of his thought, giving character to the aspirations of his soul. He was never the same again, but became as clay moulded into a vessel of peculiar fitness and beauty. Within the compass of that little town he sought and found numerous opportunities for relating the story of the power of redeeming grace and of his attachment to his risen Lord. During the early days of service there were discovered within him gifts which gave fitness for a larger sphere. That sphere was entered when, at Nottingham, the call came to create and maintain a mission in the Albert Hall. For many years his ministrations were most effectual and people flocked to hear him speak. The services were electrical with power and souls were led into Christian fellowship.

A larger realm of service awaited him in our Church when, at the age of forty, the Conference laid upon him the task of nursing back to health the feeble mission in Trinity Street, Borough, which became the nucleus of the famous St. George’s Hall, now outstanding as a monument of his patient industry and glowing influence. In the erection of St. George’s Hall and its suite of buildings, our friend rendered yeoman service, involving sacrifice and strain. Upon this work rest the marks of his hands and the evidences of foresight and largeness of vision. To make this mission a centre of power he worked like a Hercules with results almost miraculous. Its rescue from financial embarrassment and the purchase of the freehold may be described as exploits of extraordinary dimensions not without romance and not without pain. It was in this work that his name widened into a household name, and here, too, he gained a popularity which thronged village churches and city temples on the occasions of his visits.

In all his relationships to men and projects he revealed largeness of mind and transparency of soul. The circle of his life combined two hemispheres – greatness and goodness. The former was self-evident, the latter Wwas undeniable. It required no microscope to discover his greatness, it throbbed in his thought and took shape in his speech. Within him glowed a fire – the fire of genius, which oftimes flashed and flamed. He was a man of exalted thought, and needed not to reason because he saw as men of genius see. His greatness was inherent. Mother-Nature shaped his pyramid mind and gave him powers which could not be procured in the markets of the world. He had the climber’s strength and climbed. He possessed the eagle’s wing and soared to heights on which few men stand. His boat could only navigate deep streams – it was made for the sea and was often ocean bound. His triumph over difficulties proved the greatness of his powers. The Freehold Charter of St. George’s Hall is an eloquent testimony to the rareness of his gifts of mind and heart. The homes of people and public libraries contain the books he wrote – immortal treasures of artistic and poetic skill. In certain moods he dreamed delightful dreams, and became prophetic in his utterances. He could impress the strongest intellects with the projections of his thought and accommodate himself to the simplicities of a child.

His goodness was sacramental. It pervaded all he did and said, giving fragrance to the sphere in which he moved. Not related to the heavens and detached from earth, but more like a ladder touching the Throne with feet resting on the earth. It  may be described as the blending of his soul with the harmonies of God’s great and beautiful world. Its nature was broad, seeking the zigzag path in preference to direct roads. It lacked the sternness of Old Testament times, but was sweet with the fragrance of the Galilean hills. It found its food on earthly tables and drank at earthly wells, bringing the robes of heaven down to the naked forms of human life and leading men into the fold of God. It found expression in prayer and tears, broadly smiled in the midst of mirth, and took part in nature’s sweetest laughter. It shared men’s riches, became the partner of man’s prosperity, but shone in homes of grief and ministered with gentle touch to broken hearts. James Flanagan was typically a follower of our Lord, closely associated with his Master and acquainted with His methods of thought and forms of speech.

The secret of his success lay in his unwavering faith in the redemptive work of Jesus Christ. He understood the meaning of fellowship with Him in suffering and was able to interpret the mystery of His atoning sacrifice. His evangelism was centred in Calvary. He was unashamed of the fountain opened in the house of David for sin and uncleanness. He proclaimed the message of peace with God through our Lord and Saviour Jesus Christ, and taught that the solution of the problem of earth’s sufferings lay in the true interpretation of the Cross.

The power of his personality over others was tremendous. He swayed crowds and moulded individuals. “In that day many shall rise up to call him blessed.” Opportunities of moving crowds of people were numerous. Fame in London spread to the provinces, passed over the broad Atlantic and Pacific, creating for him an atmosphere into which he joyously entered. Provincial churches, Australian, New Zealand and African halls were thronged before his entrance. His utterance was quiet, measured, fervent; but within him burnt volcanic fires which often flamed. Men were caught up in the torrent of his passionate speech and carried forward into the broad stream of Christian love.

His influence over individuals was marvellous. A lover of books himself, he created the passion for reading in others. His eyes open to the chaste outlines of beautiful form, he taught others to see. Having broken down barriers himself through suffering and experience, he widened the outlook of his friends. His hand seemed always to beckon to unexplored heights. His word was cogent with orders for advance. Men thus influenced travelled far to place a flower upon his sleeping form which lay like a sacred treasure in Canaan Church, where he long had laboured, prayed, wept, spent himself. Ministers of the city in which he died, from London where he climbed to fame and from provincial towns and cities where he had often preached, together with mayors, aldermen, councillors and members of parliament, and his family beloved, gathered round his grave in silent grief. Unquestioned was the fitness of the phrase read at the open grave: “In sure and certain hope that the dead in Christ shall rise to everlasting life.” Friends greeted each other when the last word was spoken, and men moved silently away to face life’s stern realities, but the sweetness and charm of James Flanagan’s life will remain an undying sacrament to those who knew and loved him.

The following books were written by James Flanagan.

The following books were written about James Flannagan

Note: The date of his death given in the text does not agree with that given in the obituary published in the Conference Minutes or the Probate Record.