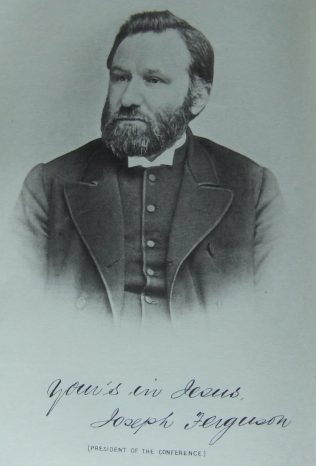 Joseph was born on 22 October 1838 at Brierley Hill, Staffordshire.

Joseph’s parents were poor and his father died when he was a child. He had little opportunity for education as a child. Joseph was working as a furnace boy in 1851.

Joseph moved to Gold’s Green early in life. There he was converted through the influence of a devoted local preacher.  Joseph was called to the itinerant ministry before he had been raised to the list of accredited local preachers.

Joseph was President of Conference in 1891 and became editor of Primitive Methodist World. He spent five years as General Sunday School Secretary from 1887. Joseph was a delegate to all three Methodist Ecumenical Conferences and acted as one of the Presidents at Washington in 1891.

Joseph was made a Fellow of the Royal Astronomical Society. He received his D.D. from the University of North Nebraska.

Joseph’s obituary records that he was a strong social reformer, a foe of intolerance and autocracy and the friend of the people. Temperance and Education were causes he particularly supported. Along with George Middleton, Joseph took a major role in the founding of Bourne College. He also influenced William Hartley to create the annual Hartley Lecture.

He was a soul winner. On some of his circuits he saw tidal waves of soul saving power.