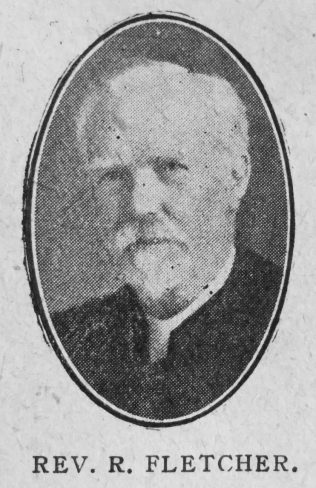 ROBERT FLETCHER: who entered the Primitive Methodist Ministry on 1877, and for fifty-seven years laboured with noble consecration. Volunteering for work in Ireland in 1889, his work brought him honour in all sections of the community of Portadown. In no part of the minister’s task was he found wanting. He was made Chairman of the West Midland Synod, and whilst attending a District Conference in Birmingham in 1917 he met with an accident which led to his retirement. The remainder of his life was spent at Wrexham. He placed all the Free Churches in his debt for welcome pulpit supplies. He was a brother beloved of his brethren. He died at Wrexham on November 3, 1934.

Robert was born in 1852 at Dawley, Shropshire, to parents William and Hannah. William was a coal miner.

Robert married Elizabeth Chapman (b1851) in the summer of 1881 at Gravesend, Kent. Census returns identify one of two children.