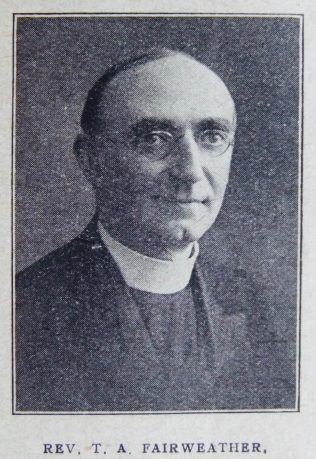 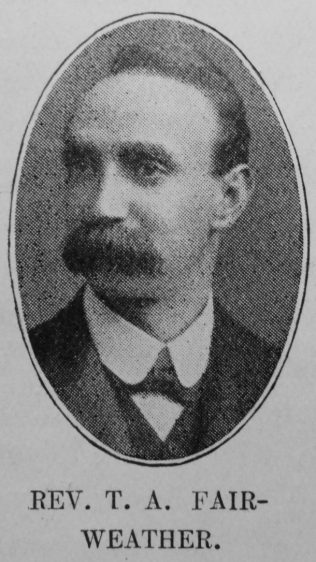 The Rev. Thomas A. Falrweather.

Oliver Wendell Holmes, is but one of a host who assert that blood always tells. It tells in the subject of this sketch. His maternal grandfather was a Wesleyan local preacher, and he himself is a Methodist of deep conviction and experience ever seeking to create the atmosphere in which the best things grow. His youth was fostered in the “Jubilee” Church, Aberdeen Walk, Scarborough, where his parents were members and his father Sunday school superintendent. He went “on note” with Councillor Bayes, the present Mayor of Scarborough, and entered Hartley College in 1901.

Probation was spent at St. Neots, Hunts, and Biggleswade. At Hastings, where he was stationed after ordination, he carried on the work in the Public Hall, and became president of the local Free Church Council and the Sunday School Union. One wonders whether any church has contributed as much to these interdenominational movement as ours. Certainly our men have ever been to the fore in new organisation and development.

Liverpool and the War Years.

Four years with the Rev. James Burton on Liverpool III station were happy and successful, but the war interfered with the work at Douglas. Visitors were scarce, and relief had to be sought, which necessitated Mr. Fairweather’s removal back to Liverpool. Short terms in Hull and Leeds filled in the interval before returning to Liverpool again, in 1919, to superintend Liverpool II.

Christian work in cities is notably difficult, and Liverpool is no exception, yet Mr. Fairweather is witnessing much real prosperity. He is not afraid of the daring experiment, and because he backs his faith by careful organising and hard work his experiments succeed. And because his people believe in him they support him. Boundary Street would not seem an attractive centre to the superficial, or a profitable one even to the careful observer, but Mr. Fairweather has made it both for himself. Here two hundred children are breakfasted every Sunday morning, and such as need simple medical attention receive it, and Christmas always provides an extra feast. A new pipe organ has been installed at a cost of £740, and of this amount £540 has been raised. Hilberry Avenue Church, recently renovated, is equally progressive and evangelical.

Mr. Fairweather is not only possessed of a kindly, generous motive, and endowed with the preaching gifts that create the best of atmospheres, but he has as his helpmeet one who supports him in every good work, and to whom his indebtedness is more than he can express.

THOMAS ALFRED FAIRWEATHER: born at Scarborough in 1879. He was blessed with the teaching and influence of a godly home, led to an early decision for Christ, and soon began preaching. After a period of training at Hartley College he entered the Primitive Methodist Ministry in 1903. His ministry of over forty years was spent in busy towns and cities. In all his circuits and among his brethren in the Ministry he exerted a singularly gracious influence. He was a man of lovable character, completely consecrated to the service of his Master. His faithful ministry sprang from a deep and wondering love of God; his sermons always contained a living message, for he possessed in rare manner the gift of expressing the mysteries of faith with convincing simplicity. A man of wide human interests, he kept the spirit of youth to the end, and was ever sympathetic towards young people, with whom he had great influence. He was a gracious personality with a genius for friendship, appreciated by his people in all his circuits. A tender and affectionate pastor, he brought comfort and strength to many in sickness and trouble. He was a wise administrator, and for twelve years was Secretary of the Bradford District, where, having exceptional business aptitude, all his work was characterised clear vision and wise statesmanship. He superannuated in 1944, and ill-health limited his later activities. In these years his trust in God was a fragrant witness. He passed to the higher life on 21st December 1948, in the sixty-ninth year of his life and the forty-sixth year of his ministry.

Thomas was born in 1879 at Scarborough, Yorkshire, to parents Francis and Mary. Francis was a tailor.

The 1901 census describes Thomas as a tailor/occasional evangelist.