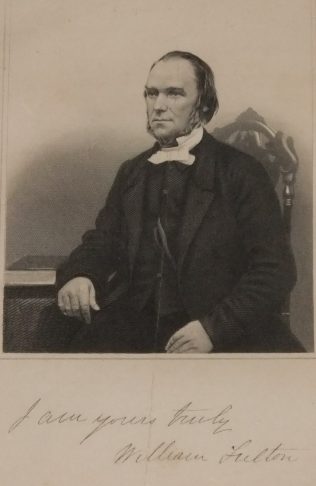 William was born on 17 July 1812 at Leitham, nr Berwick upon Tweed, Northumberland to parents William and Barbara. He was baptised on 2 August 1812 at Golden Square Presbyterian Church, Berwick upon Tweed. Wiliam’s father was a farmer. The family moved to Eyemouth shortly after William’s birth.

As a boy, William began to train for ministry within the United Presbyterian Church, but his elder brother left home and William had to leave school to work on the farm.

William was converted circa 1830 when PM missionaries visited Eyemouth. The mission was led by Rev W Lister.

William’s call to ministry was unusual. Two young men had failed in the Berwick circuit in one year and the superintendent (Rev F Smith) could not obtain a replacement. William was the choice of the circuit to step in. He was reluctant at first, but bowed to pressure and consented, somewhat against the wishes of his family.

As a preacher he was evangelical in his doctrines, and eminently practical in the character of his sermons.