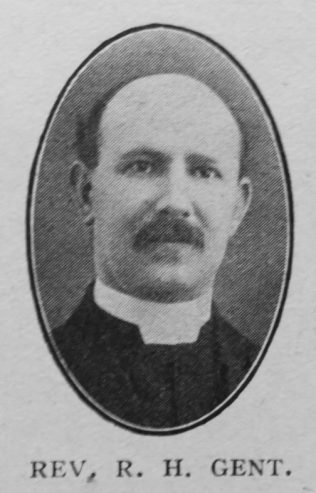 In the passing of the Rev. R.H. Gent Primitive Methodism has lost one of its most winsome and devoted ministers. The news of his early death caused a profound shock of sorrow throughout our Church. He had the inestimable advantage of a Christian home. His father was a most self-sacrificing official at Bowden Close, in the Crook Circuit, for many years, and his mother was a beautiful soul, who won all hearts.

Ministers. and other workers were for forty years welcome to the hospitality of their home. Mr. Gent caught the spirit of that home, and early became aware of God and dedicated himself to His service. He entered the teaching profession, but was soon captured and held by the imperative call to the ministry. As a student in Hartley College he was diligent and successful, and enriched and strengthened many of his fellow students.

He commenced his ministry in 1902, serving his probation at Crewe, and then superintending at Pembroke Dock, Bradwell, Peel, Chalfont St. Giles and Maidenhead. His ministry of twenty years received tone from his elevation of soul. To write a memoir of the Rev. R.H. Gent is like writing the “history of a fragrance,” for his life was a gracious one, his Christian bearing was perfect and, to an unusual degree, he possessed the love that thinketh no evil.

He was the captain of his own soul, and that soul never suffered from the deadly monotony of dullness.

He was a man of God and ever saw manhood at its best. His fellow ministers gladly acknowledge that he was a Christian gentleman, a delightful companion, a scholarly conversationalist, a man of clear insight into the Christ view of things, and of intense personal consciousness of his Divine Master. He always created a spiritual atmosphere. To preach the evangel of Jesus was his supreme gladness. He was constant in his care for the suffering and the poor and in the exercise of the pastoral gift, which was his in a high degree. Much could be written of his district secretaryships, his service as General Committee Delegate at the last Conference, his rapturous and reverent love of nature, his great love of books, his extensive knowledge of literature, poetry, art, music, and how he kept himself well abreast of the theological thought of the age, and laboured hard for temperance and social reform.

But Mr. Gent was also great in the pulpit. He was always reverent and had remarkable power and beauty of intercession. He was quiet but intense. His all-absorbing passion was to understand and declare the regnant ideas of Christ with their ethical implications. His congregations were deeply impressed with his discoveries of the golden truth beneath the letters of the Bible, the lofty purpose and clarity of his message, and the personal magnetism, self-abnegation and radiant personality of the messenger himself. He had great felicity of speech, and there seemed to be an aroma about his words. He was unassuming, but a man of deep conviction, and there was a tender gleam of compassion and yet moral fibre in all his sermons. They were arrestive and attractive. Young men esteemed him and gathered to hear him preach.

He was ideal in his home life. Fifteen years ago, in our church at Leek, he was married by the writer to the one who now mourns his loss. Mrs. Gent is the daughter of Mrs. Knibb and the late Rev. W. Knibb, who was one of our ministers. Happily her mother, who has travelled the same dark road and knows its sorrows, is spared to comfort her widowed daughter in this time of stress and strain. No minister could have had a more devoted and helpful wife than Mr. Gent had. No wife could have had a more gracious husband than he, for, however Mr. Gent might be esteemed on his circuits he shone with the utmost urbanity and was seen to the greatest advantage in his own home.

The Rev. R. H. Gent—strong, radiant and hopeful—went to Peel for the Sunday School anniversary on July 23rd and 24th, 1922. There were great gatherings and a record success. The afternoon meeting was on the Old Castle Hill, and Mr. Gent spoke with energy and freshness on the “Spirit of Wonder.” On Monday night he delivered a fine lecture on “The Culture of Pleasure.” He and Mrs. Gent were the guests of Mr. and Mrs. Dalgleish. These two friends will ever live in the grateful memory of the bereaved ones and of hosts of others for their sacrificial devotion to one of God’s good men at the time when he heard the call to go up higher. Mr. Gent. was taken ill on the Thursday after the anniversary. Everything possible was done to save him, but pneumonia supervened, and on August 11th “God’s finger touched him and he slept.” He was only forty-four years of age. In his illness he was patient and trustful, and was heard to say, “God never makes mistakes.”

On Monday morning the remains were conveyed to his brother’s house in Crook, Co. Durham. The funeral was on the Tuesday. The Rev. W.A. French offered a sympathetic prayer in the home, the Rev. E.B. Storr conducted the service in our Crook Church, the Rev. R. Laidler read the Scriptures, and the Rev. H. Fletcher, a college friend of Mr. Gent’s, prayed with pathos and simple and direct faith. Mr. Henry Green, an old friend, gave an address, reminiscent and tender. Mr. Keyte, circuit steward of Maidenhead Circuit, was also present. At the graveside the Rev. J. Clennell officiated, and the Rev. F. R. Brunskill, who represented the General Committee, offered a a heartfelt prayer.

Most impressive memorial services have been held at Peel, Maidenhead and other places. The Rev. J. Marcus Brown conducted a large united one at Maidenhead. At the parish church at Cookham Dene sympathetic references were made to the passing of Mr. Gent, and the hymn, “When our heads are bowed with woe,” was sung by the congregation kneeling, and before the blessing a collect from the Diocesan Service book for the faithful departed said.

Ralph was birth was registered in early 1878 at Crook, Co. Durham to parents William Gent, a railway labourer (1881), and Margaret Jane Stephenson.