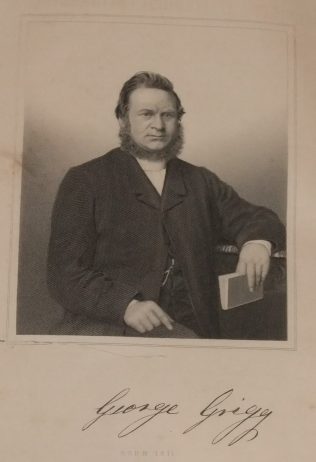 George was born circa 1810 at Plymouth, Devon.

On 11 June 1838, George visited Bisham, nr Marlow. A few friends accompanied him to assist in singing. They began an open-air service on the village green about four o’clock in the afternoon. They were soon disturbed by the local clergyman. A long discussion ensued. Finally the clergyman falsely accused George as being the origin of a disturbance caused by a number of local drunks. Nevertheless some of the crowd were deeply affected and joined a society in the neighbouring village.

The following Tuesday George went to Cookham Dean, a place notorious for wickedness. Here some of the large congregation disrupted the proceedings with lewd songs, swearing and violence towards George.

On returning to the same place on 17 July, a number of persecutors gathered at the public house to cause disruption. However one of the ring leaders was powerfuly affected by the service. Gradually the number of members increased.

Results were not so good whilst George was at St Albans in 1844. A large chapel was built and opened for worship in December 1844, but a series of disasters ensued, which rendered this chapel case one of the most painful and distressing which the connexion ever experienced. At the conference of 1850 there were only 76 members on the St Albans station.