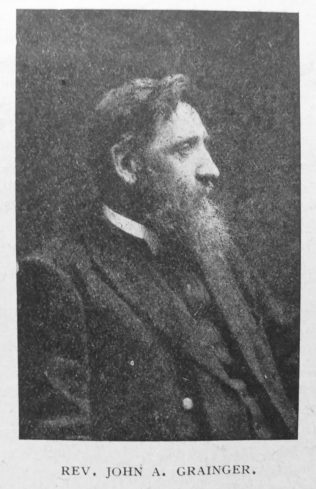 John A. Grainger passed to his eternal rest on Monday, February 25th, 1918, at the age of sixty-seven years, after an active ministry of thirty-five years, and nearly seven years of retirement.

He, while a diligent and earnest student, stood out pre-eminently as a Christian gentleman. In spirit and disposition it was universally admitted he was most Christly. He hailed from the North, and gave the greater part of his ministry to the Northern Districts. On leaving the Sunderland Theological Institute in 1876, he was appointed to Middleton-in-Teesdale, where he remained two years. The following circuits afterwards shared his labours:—Motherwell, Hexham, Blyth, Ilkeston, Middleton-in-Teesdale, a second time; Berwick, Thornley, St. Austell, Wolverhampton, Ilkeston, a second time; Staithes, and Docking. Thus twenty-three years were given to the North, nine years to the Midlands, two years to the South-West of England, and one year to the Eastern Counties.

In some of his circuits he laboured side by side with men of great Connexional reputation, as for instance, J.A. Bastow, of Bible Dictionary fame; R.G. Graham, Designated Hartley Lecturer; and Matthew Johnson, literary expert. Their intellectual abilities he never possessed, but in evangelistic zeal and fervour he was their equal, if not their superior. On some of his stations he had the joy of witnessing great revivals. This was specially true of the four years he spent at Blyth (1884-8). Blyth was then one of the largest circuits in the Connexion. There were, three married ministers, and when he left there were nearly a thousand members. Hundreds of people were converted. A gracious revival swept through the length and breadth the circuit, and he laboured to promote and sustain it to the fullest extent of his powers.

Ten years later a similar work of grace was witnessed at Thornley during the two years he spent there (1898-1900). The membership at the close of this term reached 1,082. Under the strain of the intense activity involved in this soul-saving work, came the first signs of physical defect. Much to his disappointment, and that of the people of Thornley, he had to relinquish his charge at the end of two years and seek a station in the South. One was found for him at St. Austell. Here unfortunately, he did not realise the success of former days—the conditions of life and work were new, and he did not readily fall in with them—and at this time there came to him the trouble of his life, in the peculiar affliction of his wife, from which—though she lived on until February 22nd, 1915— she never recovered. This was to him a source of great anxiety and much expense, and without doubt shortened by many years the term of his active ministry.

Domestically, previous to this affliction, no man could have been more happy. His marriage in 1880 was the outcome of pure affection. For twenty years. Mrs. Grainger stood by him in his efforts, sympathised with him in all his plans, and stimulated him in all his enterprises. She was truly pious, most devoted, an ideal wife, and an affectionate mother; and for her to be so mysteriously smitten and thus taken from his side staggered him, and from the blow he never really recovered, though he plodded on for nine or ten more years; but they were years of growing infirmities, which affected him more in the loss of memory than in physical feebleness.

Mr. Grainger was a noble man. His supreme aim was to “make full proof of his ministry.” That ministry was made a blessing to many. The honours and responsibilities of Connexional office had no charms for him. To extend the Kingdom of God by conscientiously serving his circuits to the best and to the fullest extent of his power was the main purpose of his life.

He had a quiet eventide. When he superannuated at the Conference of 1911, he settled at Heacham, near King’s Lynn, Norfolk; where, attended and nursed by his devoted daughter Grace, he passed the remaining period of his life rendering such service as he was able to the Church and neighbourhood. He is now at home with God and his loved one, whose loss he never ceased to mourn. That God may bless his sorrowing son and three daughters is the sincere prayer of his old friend.

John was born in he summer of 1850 at Seaton Delaval, Northumberland, to parents George Grainger, a blacksmith, and Jane Stewart.

Before entering the ministry John worked as a coal miner.